ANOVA or paired t-test in R?

Hi all.
I ran a survey where I showed 2 ads to men and women in 5 different countries to see which they preferred. I want to know if gender or country influenced the selection of a particular ad preference. The data is normal.

I was told to use a One-way ANOVA but I don't think this is correct as I have 2 numerical categories (number of people who selected each concept) and the rest are categorical - basically, I don't have 3 columns of numbers, only 2.

Then, I explored using a paired t-test, but i'm not sure how to perform this to see differences between ads AND countries - will I have to run multiple tests between 2 countries to find one with a significant difference?

Any advice would be fab!
Thanks

A One-Way-ANOVA checks for differences within groups, e.g. your null hypothesis will be \mu_1 = \mu_2 = \dots = \mu_k, where as the alternative would be \exists i,j: \mu_i \neq \mu_j. Within one categorical grouping variable (e.g. countries), you can then see if there are significant differences in mean between the means of the groups. If you would perform a normal t-Test for every group member of countries (e.g. country 1 vs. country 2, country 1 vs. country 3, etc.) you will definitely find some significant differences - but this is just due to the design of statistical tests: 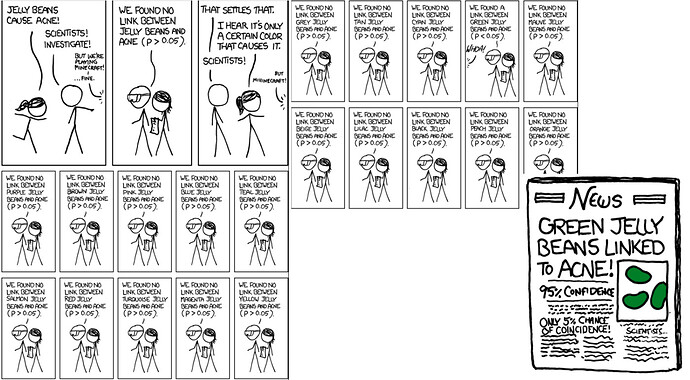 A paired t-test however can only be used for dependent observations. So e.g. if you would test for differences in means between two countries in to (subsequent) observation periods (say 2022 and 2023, preferably with the same participants).

In your case I would suggest to have a look at multiple factor ANOVA (see Analysis of variance - Wikipedia, point 8). Only in this case you can be (relatively) sure to observe a true difference in means and not just a difference by coincidence (as with the multiple t tests).

Hope I could help a bit.