Create a column based on conditions met in 2 columns

Hi everyone,
I want to add some columns to this data (df = PersonDedupe2) specifying who was new or who left a service in each month. The data shows 0 where they were not receiving a service that month and 1 or more where they were (1 = attended 1 service, 2 = attended 2 services etc). 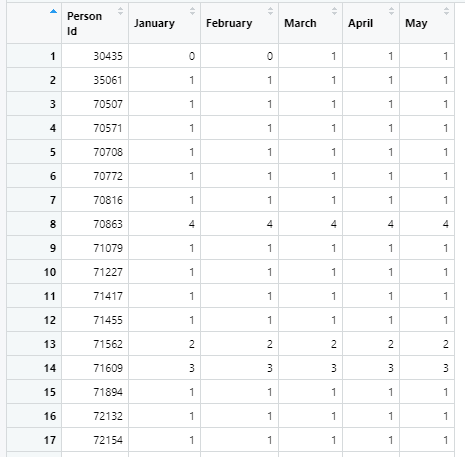 So in this image, the first person was not open to the service in Jan or Feb but was open in March, and therefore new that month. But then carried on in April and May so in those months was an existing service user. The service user in row 8 attended 4 services all 5 months so would be classed as an existing user the whole time. If a person previously had a service in, for example, January and then had a 0 in February, their service would have ended.

So, those are the three scenarios. I'm basically thinking 4 new columns - FebStatus, MarStatus, AprStatus and MayStatus (no JanStatus because I don't have Dec data) and 3 potential options - New, Existing, or Ended. They will be classed as new if they have a 1 (or more) in the current month where there was 0 in the previous month. They will be classed as existing if they continue to have 1 or more in the current month and previous month, and they will be classed as ended if they went from 1 (or more) to 0 from one month to another. At the moment I only want to know these three things (and not whether they increased or decreased services, e.g. went from 3 to 4 services)

Does that all make sense?

See the FAQ: How to do a minimal reproducible example reprex for beginners. Being able to cut-and-paste a data frame is an advantage to attracting answers.

Every R problem can be thought of with advantage as the interaction of three objects— an existing object, x , a desired object,y , and a function, f, that will return a value of y given x as an argument. In other words, school algebra— f(x) = y. Any of the objects can be composites.

In this case, PersonDedupe2 (which I'll refer to as dat) plays the role of x. It's a matrix-like object (a two-dimensional array of all numeric values) that may be of class matrix, data.frame or tibble.

f is the function to be composed that populates out. Let's start with a single variable in dat, February.

The first row of dat illustrates one outcome—the current and prior months are both zero, which is an unprovided for case in the problem description, a subject with no recorded activity in the past or current month. I'll encode that case as NA.

The second row records a subject with non-zero activity in both the current and prior month, so that can be encoded as existing if the activity is equal each month, otherwise changed.

Not shown for February is the case in which the current month is 1 or more and the prior month is 0, so that can be encoded as new.

With that in mind, the following code tests each pair of column vectors and sets the appropriate encoding (user to verify) in a new data frame. The code is hardwired, which is poor practice when programming for a recurring need—object names, column positions and encoding should all be parameterized.