I am stumped and trying to create a dataframe with the first instance ONLY appearing for Year and Team from my FinalGS dataframe. Screengrab of this dataframe and associated code is below.

For example, for the the 1997 ANA, I need just the first row returned in a dataframe (e.g. finlech01 ) and not all 11 names currently listed after (e.g. langsma01, perisma01) for that specific team and year. Wanting to replicate this for all other unique year and team IDs to then perform analysis. 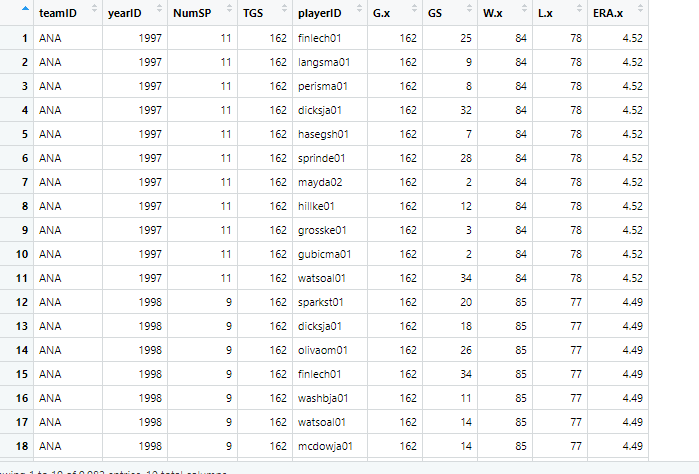 Can you use group_by() and slice() as in the following example?

Thanks for replying. I am not familiar with the slice() function. Would that do it automatically for first unique instances by team and year? in your example, it appears you made those columns manually before splicing?

slice() takes an arbitrary row, chosen by parameter n; in this case n=1, i.e. the first row of each group

Thank you very much for this! Slice() did the trick and I followed the code/example posted by @FJCC upthread to amend my code and get it where I needed it to be to perform analysis/viz in ggplots.

The solution of code for me ended up being: