Error bar and points not aligned in bar plot

Hi! So I want to make a bar plot showing several groups of data at the same time. So I have two groups of mice (ctrl and treatment), each one with its own error bar (which I can't make centered...). Also, each point is a single mouse, some of them are males and females, so that's why I have 2 colors in it. But the points have the same problem as the error bar, they are not centered. Can someone help? I imagine it's not hard but I've started this week with R studio. Thanks 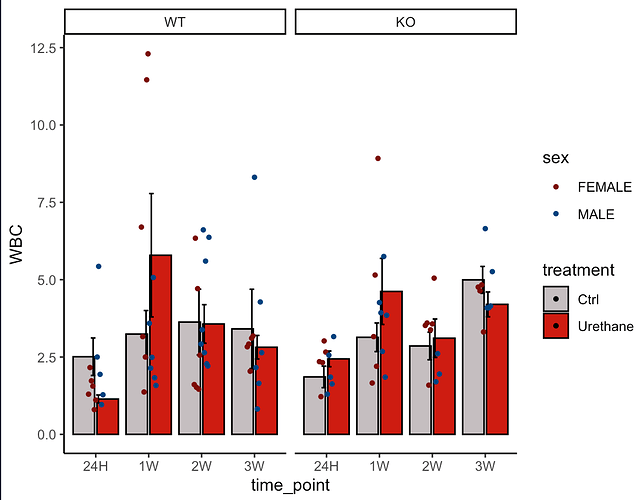 This is more of an iterative trying than a fully justified answer:

First, use position_dodge() rather than position_dodge2(). Second, in that case a width of 1 works better than 0.2 (which would mean having the bars intersecting, since the width of the dodge becomes smaller than the width of the bar). Third, you have a small problem of the sex influencing the dodge; that can be arranged by specifying explicitly the grouping in the common aes (and adding the fill and color in the separate ones). Fourth, in geom_jitter() specifying a position via position_dodge() will actually eliminate all jitter. You need position_jitterdodge(). So something like that seems to give you the right output: 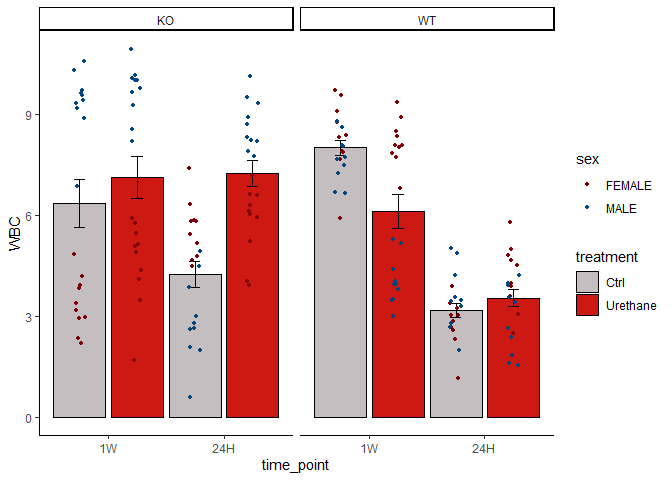 Note that for the example, I had to create fake data, where there the mean is random for each condition, so the male and females can easily have very different means and look weird.

I imagine it's not hard but I've started this week with R studio.

I love ggplot, but to be honest that particular aspect of position_dodge() is something I never fully understood and I always have to try until it fits (often, I need position_dodge(0.8) but no idea why). So, I would say you are starting with one of the harder cases!