Can someone light on it:
Executing same command " >n <-3 rnorm(1)", results different numbers, each time value of n is changed? What could be logic behind this.
Thanks
Azeem 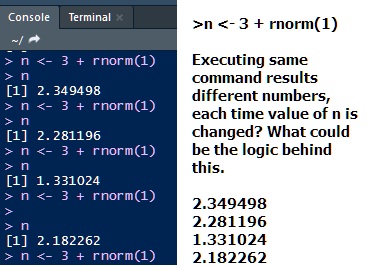 Yep, I knew it however the logic behind resulting random distributions.

There must be a reason programmed in mean and variance in resulting random distributions. 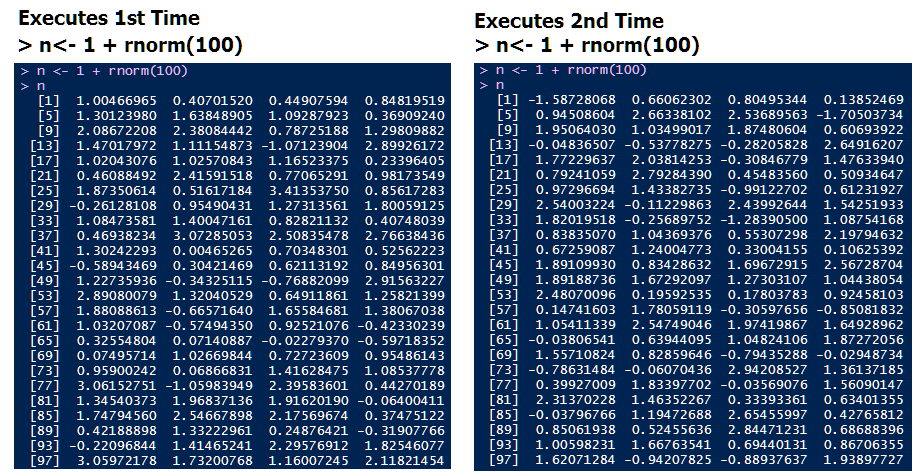 I'm not sure what your question is.

My question is simple, why rnorm generates Random values?

Because that's the purpose of rnorm....

Yes you are right.
n : the number of random variables to generate . mean , if not specified defaults to 0 .
Actually, I am working on some relativity on numbers resulted by executing rnorm same command (100 times) on R console, and each time it resulted random numbers, I am trying to see the logic formulated behind it. Will share you the details If get something. Thanks for being a part of communication.

Hope you are doing great, I have excuted >norm(100) three times on RStudio console, it generated random values as shown in attached graph.
It populated Positive Random Numbers b/w 42% to 48%, however Negative Random Numbers remained b/w 52% to 58%.

Still trying to know that how Rnorm works on Rstudio compiler?

Amazing and very deep coding is done at backend.

Thanks, I studied about the rnorm however willing to know how does it generate random numbers in Rstudio?.

Will appreciate, if anyone put light on "rnorm" in Rstudio. 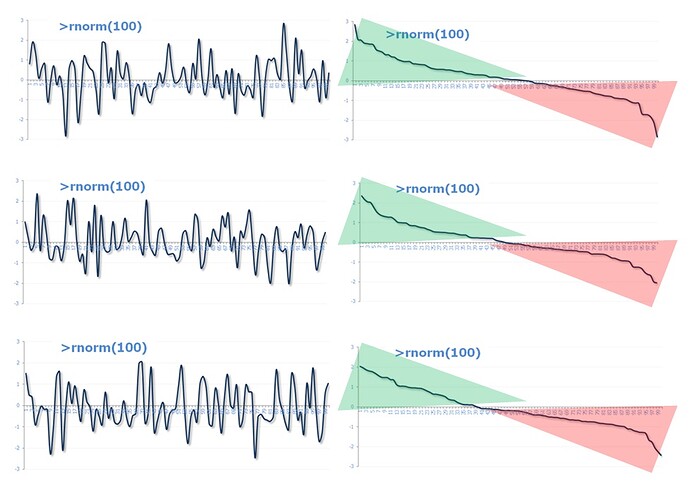 Maybe you could explain in more detail what you want to learn about rnorm().

Thank you, you are right, I checked rnorm(1000), it resulted positive/negative exact 50/50%, I am new in Rstudio, trying to know the exact mathematically application of rnorm(), How and Why does rnorm() purpose producing random number in such a spike and disparity way.? especially on Rstudio, how is it programmed on Rstudio.
and who is the inventor of the rnorm?

You can learn more about the command by going
?rnorm

Here's more explanation of how R random number generators work. They are all pseudorandom, in that the result is ultimately deterministic if you start from the same seed (e.g. by setting set.seed(0) or with any other number you like. But the output is intended to have very similar statistical properties to true random numbers, such that for most use cases the distinction can be ignored. 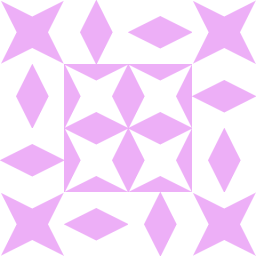 How exactly does the R random number generator work?

I am actually Contact Center Workforce Management professional, it will help me in analysing KPI (Key Performance Indicator) gradings.
When I start working on Rstudio, it gives me a feel of Swiming into the deep sea.

Thanks for help.
Will be in touch.
Regards, Azeem

Thanks a lot, Will get back to you, If need be.