Hi, I downloaded the Survey of Consumer Finances for R by following this tutorial http://asdfree.com/survey-of-consumer-finances-scf.html
I have 2 files. The first scf_imp (Large list 5 elements 1.3 GB). The second scf_rw (appears to be the weights of each variable). I only interested in 2019 so I use this code:

In addition, the following code is provided if I aren't wrong it is to get the proper design

I have never worked with lists or surveys with such a volume of information and I not sure how to do basic calculations because usually I just worked with dataframes with a variable and its weight. My question is how do I access the values of each variable taking in to account that the info of 1 variable is spread in 5 diferent elements (dataframes) of 1 list and it has to be weighted. For example, the sum of the variable x weighted. Or the sum of the variable y weighted when the variable z is bigger than 300. 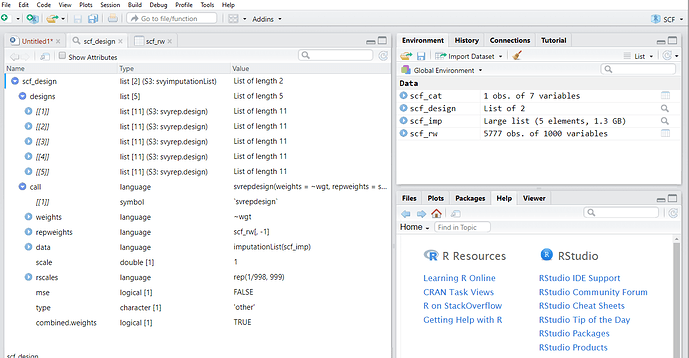