In my real data, I would have a lot more years. Because of that, I tried to do a for loop, in which I create the variable names.

The problem is, that R doesn't understand, that value_df1 and value_df2 are meant to be the variable names, that's why the result is the following: 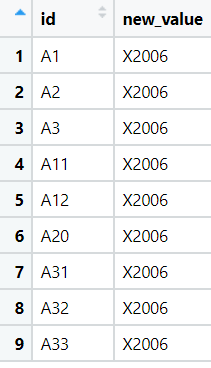 The mutate()-function itself works, when I execute the code with specific variables.

I also tried it with the merge()-function, in that case, the variables are named the same:

Do you have any ideas, how I could solve the problem?

Thank you for your response @nirgrahamuk. Unfortunately the to_add code doesn't work, because the pairs_to_do is not defined.

sorry, copy paste error on my part.
the missing code :

Thanks a lot, this helped me a lot!