I've noticed that dplyr::rowwise() is back on the table (" rowwise() is no longer questioning", from https://github.com/tidyverse/dplyr/blob/master/NEWS.md).

I am happy about that since the syntax is sleek, but I wonder if there are any reason to believe that rowwise() based workflows could become much faster in the near future?

For now, the small following benchmark based on the non-(fully)-vectorized function dplyr::between() shows that purrr::pmap() remains much more efficient (both in terms of CPU and memory) when datasets get relatively large: 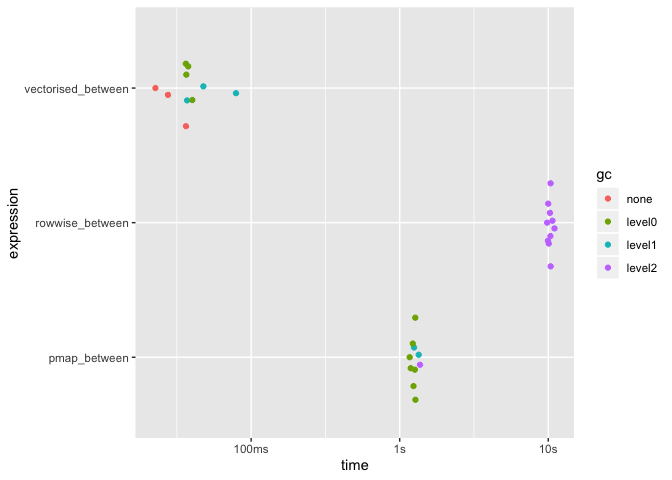 My immediate interest is that I will soon be attempting to convert SPSS people to use R and these people deal with large datasets only. I wonder whether I could spare "purrring" them...

PS: I used here between() only as an example and I do know that many tasks can be vectorized.

Perhaps the answer to my question is yes:

I've been studying and writing about grouped operations over the past couple of months, and one thing that has become apparent to...

Thanks for opening this topic, it's an interesting one - I too enjoy the rowwise/ungroup workflow.