I have a bookdown book with a lot of greek symbols inline. I've put them in using, I presume, Unicode. In RStudio the text looks like this example:

Which is nice in that it actually shows the Greek character beta. If I render to gitbook or other HTML it looks as expected. However if I render it to LaTeX (book down::pdf_book) the beta is totally missing:

I realize I could go through and replace all my betas with $\beta$ but that's a daunting prospect given the size of the book.

I tried switching from pdfLaTeX to XeLaTeX to no avail. Any ideas on how I might make my β as well as my α and λ show up in LaTeX?

Even in the tex file used to generate the image, there's a slight misstatement about direct Unicode. What was actually entered was ȃ ≅Ŷ, but the rendering dropped the ≅symbol.

I think you have two additional unpalatable choices in addition to the one you identified, which isn't actually that bad given that stringr handles Unicode pretty well:

Here's the tex file I used:

Oh, one other thing. \tilde positions atop the preceding character, you need \thicksim for a standalone.

Good reproduction of the issue I'm facing. In your example do you understand why the ≅ is getting dropped?

Also, I'm perplexed as to why the unicode gets rendered properly in HTML:

I copied and pasted the whole greek UTF-8 table from here into my book just for testing. All the greek characters render fine in HTML but with XeLeTeX only some of them do.

You can see in this subset (colored boxes added for emphasis) that the core uppercase greeks work fine but not the lowercase: 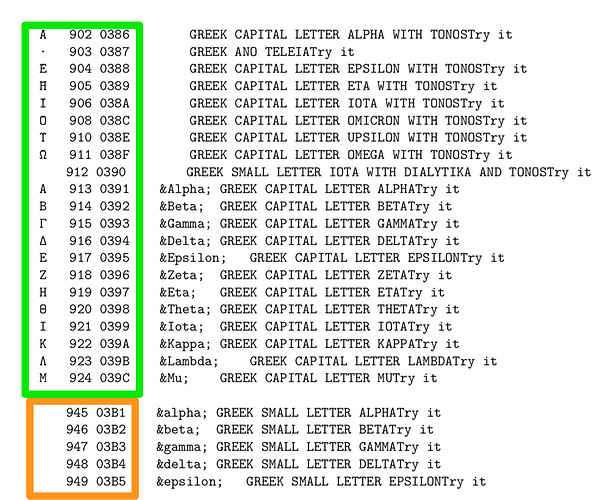 Interestingly, this is the case whether I surround the text with code ticks ``` or not. Even though code text uses a different font than body text.

So I decided that this must be a font issue. After re-reading a lot of the Bookdown book I realized that I can change the font by changing a few settings in my index.Rmd file. So as an experiment I added the following to my YAML:

Future travelers should note that the above font options are ONLY applicable when using XeLaTeX... other LaTeX engines use different options to change fonts.

Then when I rendered my book to PDF all worked as expected: 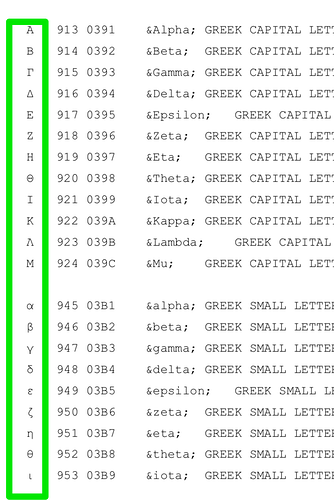 So the issue was the default font used by XeLeTeX.

XeLaTeX is supposed to allow direct unicode entry in the source, but it depends on which source editor one uses is my best guess from multiple experimentation.