I have a set up on an EC2 server with both hosted Rstudio and Shiny Server installed. My home directory has a ShinyApps directory. I recall creating this when setting up Shiny Server. I am now able to host my shiny apps by placing them inside that directory. They then appear at: http://our_url.com:3838/rstudio-doug/my_shiny_app/

I'm currently working in a different environment and am struggling to replicate this set up.

Our dev ops team provided me access to hosted rstudio and shiny server running from the same docker image (rocker/tidyverse with ADD=shiny) on a server. Rstudio is set up fine. Shiny server appears to be too, I can access the 'welcome to shiny server!' page and see the 'It's Alive' app and 'Shiny Doc' in the right hand column. 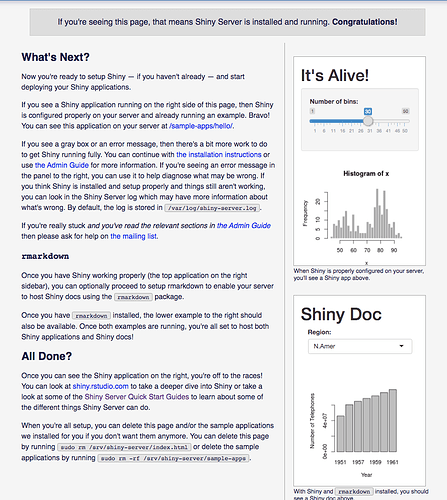 I can also see the example application at https://our_url/sample-apps/hello/

I followed along the instructions on the quick start guide about letting users manage their own applications.

I have run the following commands as sudo:

The user-dirs config is all setup now. Enjoy!

" By default, Shiny Server listens on port 3838, so your new application will be available at http://<server-address>:3838/<your_username>/hello where <your_username> is your Linux username."

Directory ShinyApps is indeed in my home directory. My linux username is rstudio. In ~/ShinyApps is the example app 'hello'.

When I visit this url I do see the app: https://our_url/sample-apps/hello/

However, when I visit:
https://our_url/users/rstudio/hello/

In case it's relevant, when our developers handed this off to me I reach the Shiny Server by not typing a port in my url bar. I asked them to clarify:

In case relevant, here is shiny-server.conf:

How can I access the Shiny App in user rstudio's home directory ~/ShinyApps/hello?

[Edit]
After playing around with the conf file I tried to restart:

Since I'm running Shiny server in the rocker/tidyverse image my linux environment is Ubuntu. It's odd because I can see shiny running as a process and I can also see the example app running fine at the welcome page.