How does left_join, dplyr self-join with filter work ?

I would like to understand how this two dataframes (one of them is a subset from the other) can be joined together if a first dataframe has got 15 rows:

We finally got a new dataframe with 15 rows and 6 columns (no NAs - surprisingly to me?): 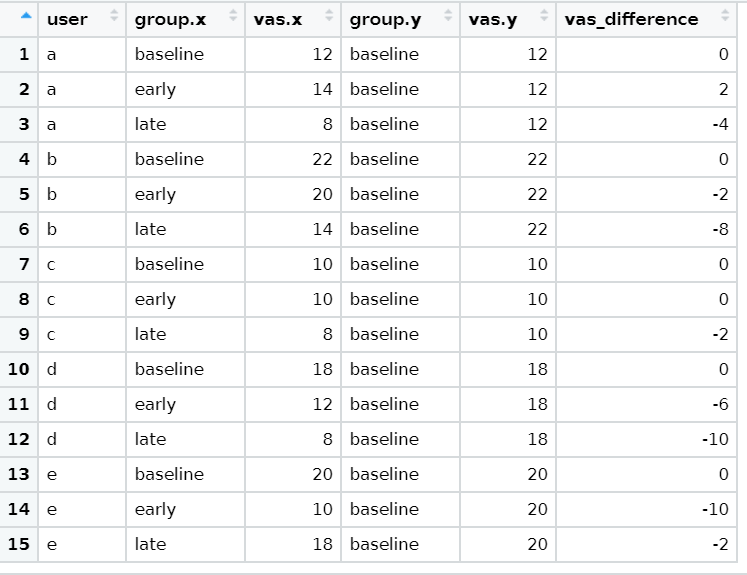 I apologize fort a naive question, but would it be possible to see where all cells (values) from
"vas_baseline" are situated now in "vas_with_diff" ? Sort of like maybe conditional formatting in an Excel way.
What would have happened if "vas_baseline" had more columns than "vas_1" ?

its no na's because you only joined 'by user' rather than by user & group. So you get a value wherever there is a user match, which is everywhere

The generation of NA values as a result of a join is dependent on the joining keys, not the number of rows in the data frames being joined.

In the example, vas_1 and vas_baseline are being left joined using only the user variable. So, the variables in the right data frame (vas_baseline) will be joined to vas_1 wherever a match is found for user. Since both data frames contain all 5 possibilities (a to e), there are no NA values in the result.

If instead you added group to the join criteria, then you would get NA values, since the vas_baseline data frame contains only one group type.

I apologize fort a naive question, but would it be possible to see where all cells (values) from
"vas_baseline" are situated now in "vas_with_diff" ? Sort of like maybe conditional formatting in an Excel way.

I don't think there is a way to highlight matched rows (if I understand correctly what you mean). The rows which returned NA for the variables in the right data frame are the unmatched rows.

Thank you All for your reply,
I have tried in Excel and below there is a result.
I hope that is correct: 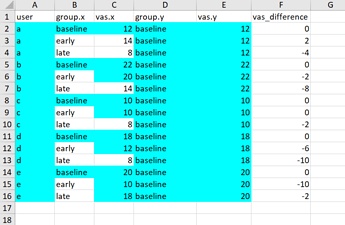 If this is not correct, please let me know.
Or even this: