how to interpret kaplan meier plot?

Hi all!
I don't know how to interpret this plot. Patients with low-TMB had a better prognosis? What does mean p=0.71? 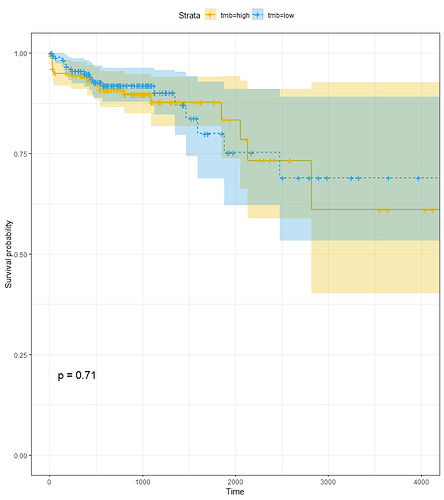 You have not shown the code that produced the plot, so this answer is my best guess.

Keep in mind that I constructed those answers without knowing how the plot was made. Think carefully about whether they make sense.

Hi!
A great resource for survival analysis in R is this tutorial from Emily Zabor: Survival Analysis in R

I highly recommend it!

As far as the example you showed, the p-value is from a log-rank test. My interpretation of that result would be: “these groups have similar survival estimates”

I don’t know what method was used to group TMB high and low, but I am guessing that the continuous TMB variable maybe have been split by the median value. You might consider instead splitting into three groups (tertiles) to visualize the KM and also using coxph to test the effect of TMB as a continuous variable.

Thanks for all your guidance, really helped