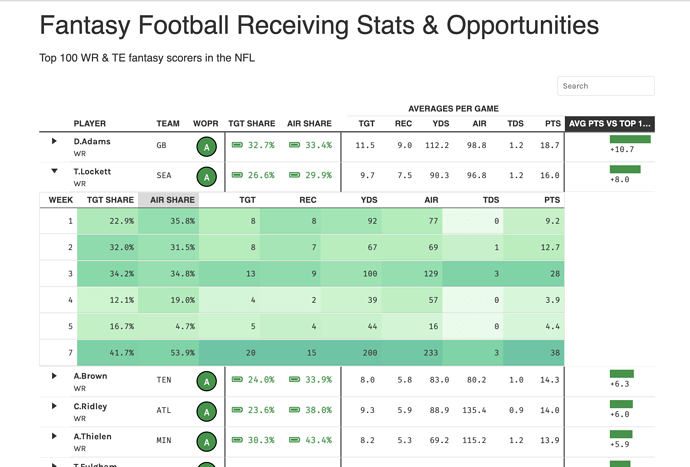 Interactive table displaying the top 100 WR & TE fantasy scorers in the NFL and their average opportunity and performance metrics per game as well as an option to drilldown and see that player's week by week stats. You do this by clicking on their row or dropdown arrow, which shows (or hides) a hidden, collapsible table in the row.

Note: This version is currently updated through week 7 of the NFL season, however, the code to make this update continuously throughout the season is included in the Rmd file.

The interactive table was made using the reactable package and the data is sourced from the nflfastR package.

This interactive tool can be used to help your fantasy football decision-making by shedding light on which WR & TE's in the NFL are receiving the most opportunities in the games they play and whether they are underperforming/overperforming based on their share of opportunities.

For example, if you are having difficulty deciding which WR to start in a given week, you can look at each player's WOPR, which is their Weighted Opportunity Rating developed by Josh Hermsmeyer from FiveThirtyEight. WOPR is the weighted average of a player's team target share and team air yards share. If one of your players has an 'A' WOPR rating and the other has a 'D' WOPR rating, you should consider starting the player with the 'A' WOPR rating since that player has a larger target share and air yards share compared to the other player, and therefore, should have more opportunities to score more fantasy points.

Another way you could use this tool to your advantage is to look at which players are buy-low or sell-high candidates. For example, if a player has a 'D' WOPR rating but they are averaging more fantasy points per game relative to the Top 100, this player is over-performing where they should be based on their opportunities and it might be a good idea to sell-high on this player and trade for a player who has a higher share of opportunities.