Hello, I'm new to Rstudio and already a bit lost.
I imported the csv file with my data with worked well. I have a few numeric variables (numbers) and a few characters. When imported the data, it shows the numbers as num. But once I check with is.numeric or in general what class it is, it shows that the variable is classified as character. I tried every fix I found googling, but nothing worked. Some do have missing values which is set as empty, but the first variable is the number 1-318 without missing values and it still is somehow classified as characters or double (even though it shows an num when viewing the data).
Anyone can help me with fixing this?
Thanks in advance

Can you provide a reproducible example?

FAQ: What's a reproducible example (`reprex`) and how do I create one? meta

Why reprex? Getting unstuck is hard. Your first step here is usually to create a reprex, or reproducible example. The goal of a reprex is to package your code, and information about your problem so that others can run it and feel your pain. Then, hopefully, folks can more easily provide a solution. What's in a Reproducible Example? Parts of a reproducible example: background information - Describe what you are trying to do. What have you already done? complete set up - include any library() calls and data to reproduce your issue. data for a reprex: Here's a discussion on setting up data for a reprex make it run - include the minimal code required to reproduce your error on the data… 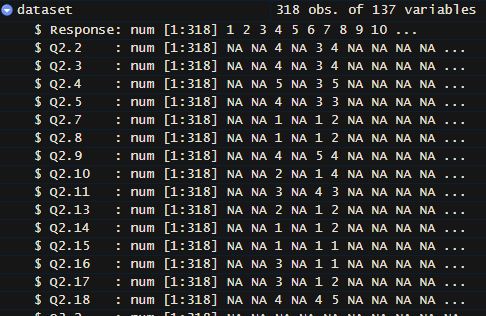 As an example, "Response" are the number 1-318 without missing values. 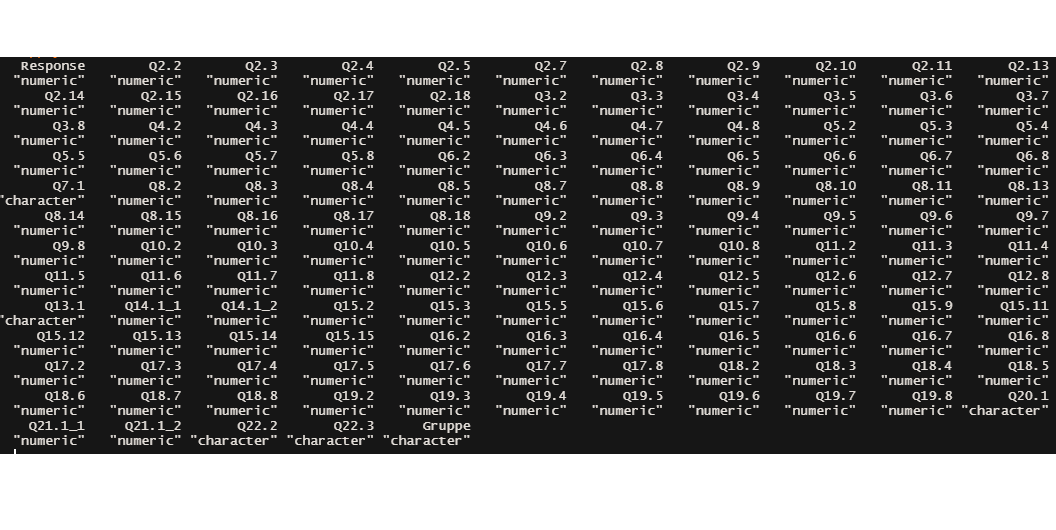 As far as I can see, the ones that should be set as numeric are (there are a few character variables).

If I run a summary of the whole dataset, it looks something like that (which is what I want/need):

But if I do it individually, it shows up as character:

your last post shows you are asking to get a summary of a single string whose content is the text 'Response'
if you want to get the Response vector out of your dataframe that you called dataset you would need to use the $ operator.

Thanks a lot. As I said, I am new to R and Rstudio and the tutorials I watched told me to do as I posted. The $ operator seemed to work. Thanks a lot!