See the two R charts and a table of data here: 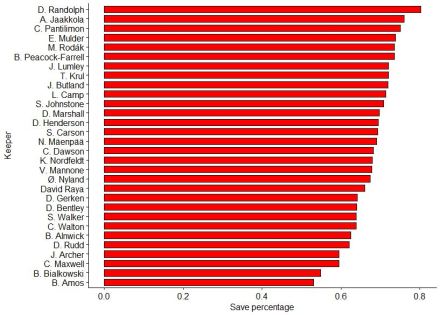 Shots vs saves for Championship keepers: Who tops the tables?

Who’s the best shot-stopper in the Championship? Right now, after 21 games, it’s Middlesbrough’s Darren Randolph. If we measure shots saved against shots faced, Randolph has an 80…

Here's the code. Can anyone see any likely causes?

Apologies, I'm not sure how to present that code chunk.

I could potentially provide the data as well for a reprex.

Yes, a reprex would help.

Re. formatting, see the FAQ, below.

Jump to Contents Code Chunks Quote Snippets Show-Hide Spoilers Markdown Text Formatting Code Chunks You type in community: ``` r #> A code chunk library(foo) ``` You get: #> A code chunk library(foo) This is easier to read. It also creates a clear chunk of code for others can copy and paste into their own R environment. Inline Code Type this: I really wanted you to see `this_code_here` See this: I really wanted you to see this_code_here Quote Snippets If you highlight the content and click quote it will automatically populate the reply with the formatted code: [image] [quote="stephhazlitt, post:5, topic:6246, full:true"] How do you insert a quote from the th…

FOr example, Jaakkola in the top right is right on on the line when he's above average in terms of numbers

what are the shots and saves for Jaakkola?

Since I'm not sure of your preconceived notions, it's hard to guess what might be causing it to not look right to you. Maybe you could share examples what what you would expect vs. what you see.

I can describe what I expect to see.

The mean save %age for all keepers is about 0.68, so I would expect the line to trace along that value.

Here's that bit of code again, but it falls short of a reprex as I can't make sense of how to put my dataset on here:

The mean save %age for all keepers is about 0.68, so I would expect the line to trace along that value.

In your regression the coefficient of y can be interpreted as "for each additional shot taken, how many additional saves would be expected?"

If you really want to see what a standout Jaakkola is, you need to build a model without Jaakkola in the sample and then show what he would have been expected to do based on that model compared to what he actually did. You're currently building a model where Jaakkola is part of the "expected", i.e. the training set.

That makes sense. Thank you. So, how do I force the intercept to go through 0,0 in R?

(PS, Jaakkola is not my focus here. He was an illustration of someone I thought was in a strange position relative to what I thought the line should do)

I think this would do it. It's a little tricky because the modeling built into ggplot does not make it easy to omit the intercept.

Adding regression line text to graph with no intercept ggplot

A simplified way of doing this, however, would be to calculate the desired slope of the line outside of ggplot then use geom_abline to just plot the line on the graph.