Hello everyone,
I am struggling merging two files together. I explain : in need to merge two files (one file is dataset 4 and contain list the gdp per year for certain countries. The other one is dataset 3 and contain the population for certain countries, including for countries that are listed in the first one but not solely).
I have used this : dataset4 = merge(x = dataset4, y = dataset3,) to do it but that leads to this

What i precisily need to do is not clear but i think i must do something more like having the countries listed and when there is both pop and gdp variables available for it, it shows everything in the same row and when it's not the case, you only have one of both variable.

I joint two pictures of my dataset (dataset3 and dataset 4) in order to make it more clear. (in comments!!!!!)
Is it possible that the fact that in the dataset 4, Country is in capital letters (COUNTRY) and in the dataset 3, country is written Country, the source of the problem ?
I also think that i have to create an independent "newdataset" (the one that has been created after merging the other)

Thanks in advance and best regards,
A. 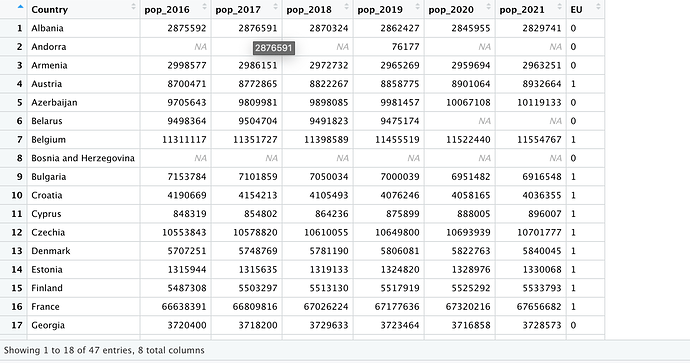 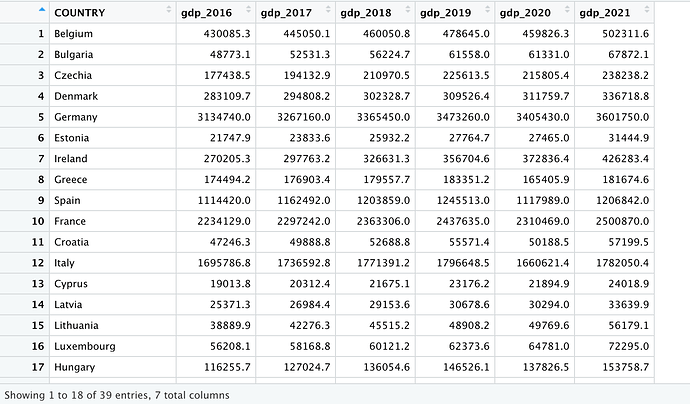 Hi, can you provide a reproducible example instead of a screenshot? It makes it much easier to help. Can you also share the code that you have tried?

A minimal reproducible example consists of the following items: A minimal dataset, necessary to reproduce the issue The minimal runnable code necessary to reproduce the issue, which can be run on the given dataset, and including the necessary information on the used packages. Let's quickly go over each one of these with examples: Minimal Dataset (Sample Data) You need to provide a data frame that is small enough to be (reasonably) pasted on a post, but big enough to reproduce your issue. Let's say, as an example, that you are working with the iris data frame head(iris) #> Sepal.Length Sepal.Width Petal.Length Petal.Width Species #> 1 5.1 3.5 1.4 0.…

Like said @williaml, is better help you if put the example data
Paste the result of: