Abstract: Network meta-analysis (NMA) has been increasingly adopted in evidence-based medicine to answer the question “which intervention is the most effective?” for a given condition. It quantitatively synthesises evidence from the comparison network of all relevant trials. Statistical complexity limited researchers who used it primarily to statistical experts. MetaInsight removes this restriction by conducting NMA using an accessible ‘point and click’ interface whilst leveraging established analysis routines, with the aim to improve healthcare decision making.

Full Description: Network meta-analysis (NMA) has been increasingly adopted in evidence-based medicine to compare multiple interventions since it addresses the crucial question ‘which intervention is the ‘best’?’ for a given condition. NMA requires specialised statistical modelling making accessibility problematic for non- statisticians. This in turn means that systematic reviews conducted by those without the skills to conduct NMA inevitably synthesise the trials of each intervention separately (using standard meta-analysis techniques) producing results that cannot identify the ‘best’ treatment among them.

MetaInsight is a tool that conducts NMA via the web requiring no specialist software for the user to install but leveraging established analysis routines (specifically, but not exclusively, the netmeta and gemtc packages in R). The tool is interactive and uses an accessible ‘point and click’ interface and presents results in visually intuitive and appealing ways for immediate download.

As well as carrying out analyses, data and results are presented graphically, and exploration of the robustness of the results is encouraged by the ability to explore the impact of excluding specific studies in the evidence base directly within the interface. As is the checking of the modelling assumptions via a consistency of evidence assessment.

The advanced section of the app allows the user to fit NMA models via Bayesian simulation methods using the external package JAGS (https://en.wikipedia.org/wiki/Just_another_Gibbs_sampler). In addition to technical advantages, this also allows the checking of modelling assumptions via cross validation and the use of model fit statistics to choose between competing statistical models. The app also allows the user to download the R code used “under the hood” that carried out the analysis to ensure reproducibility of research.

It is hoped that this tool will assist those in conducting NMA who are not statistical experts, and, in turn, increase the relevance of published meta-analyses, and in the long term contribute to improved healthcare decision making as a result.

MetaInsight was developed by the UK National Institute for Health Research (NIHR) Complex Review Support Unit (http://www.nihrcrsu.org/guidance/apps/) whose remit was to improve the value of systematic reviews which the NIHR funded. It became apparent that lack of accessible user-friendly software was a major stumbling block for health researchers without advanced statistical expertise with respect to carrying out state-of-the-science analyses such as network meta-analysis. It was decided that a Shiny app would be the most effective solution to this problem. We have received excellent feedback on MetaInsight and know it is getting 100s of hours use each month by researchers in many areas of the world, including those in low and middle income countries. In addition to its primary function of allowing non-statistical experts to do research using NMA, we get enthusiastic reports from statisticians who use it because of its ease and efficiency and educators who use it as a practical teaching tool in the classroom. The Cochrane Collaboration (www.cochrane.org), whose work is internationally recognised as a benchmark for high-quality information about the effectiveness of healthcare, promoted the use of MetaInsight recently via a webinar (https://training.cochrane.org/resource/metainsight-complex-review-support-unit-crsu-network-meta-analysis-nma-web-based-app). 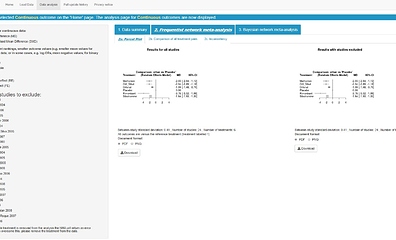 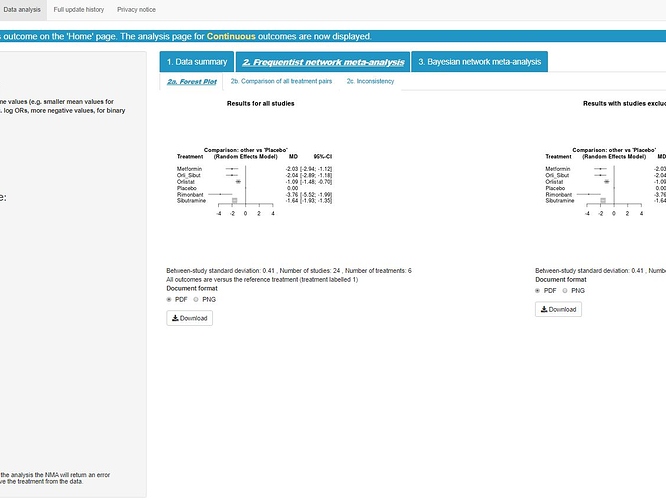