Currently I am trying to generate a new sum variable with mutate(). I want to generate the sums of 10 different variables where row-wise are always different numbers of figures to sum up. So in one row only 2 of 10 variables have summable numbers (The rest is NA), in other rows there 4 or 6, for example.
I already know that in this kind of data frame it's important to omit NAs to sum up rows. That's why I wanted to use na.rm=TRUE, but in mutate() it's just gonna generate a column named "na.rm" with all rows showing the content "TRUE".

Now I have already tried the following approaches:

None of these approaches works in my case. The sum variable just remains NA in all rows which contain at least one NA. So I guess the NAs won't be omitted properly for some reason, even though I put na.rm on "TRUE".
I have also seen that the operations in the code blocks above just won't do anything. They won't generate a new sum column or change the existing one from the mutate() operation which won't omit the NAs.

I gotta overlook something and I just don't know what. 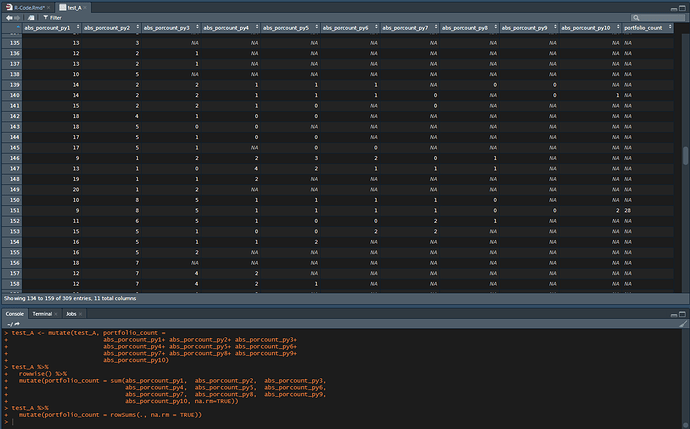 The rowSums() approach works fine if you nest the selection inside it.

Now it's getting really weird, siddharthprabhu:

I have copy-pasted your code (which works just fine here) in my code Markdown and it just won't generate a sum column.

What you can see here is the result after I executed the copy-pasted operations. Is there something which blocks this operation...? 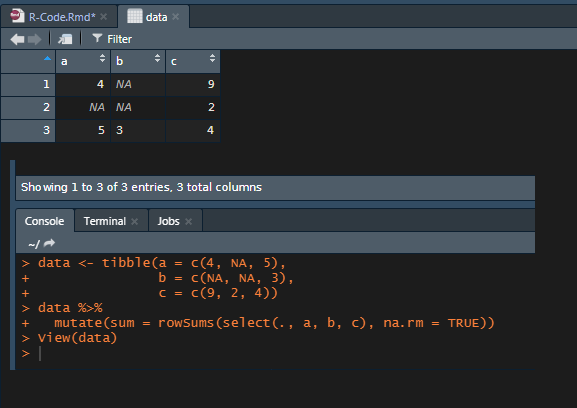 You haven't assigned the result back to data. So View(data) just gives you the original tibble.

It just worked out fine. I am just as thankful to you as I am feeling stupid right now.

No worries. It happens to the best of us at times.