An RStudio Cloud (free version) project will not open.
Upon trying to open it, a popup box appears with the message:

Project "/cloud/project/project.Rproj" could not be opened: file line number 2 is invalid.

There is an "ok" button in that pop-up box. If "ok" is pressed, or not, the Project session tries to restarts, at which point the pop up occurs again, ad infinitum.

I hoped there might be some way to access the files on the Linux file system. For example, if I open another project, I can access the Linux terminal and can cd, ls and even use scp. This would allow me to scp the files elsewhere, if only I could access them. However, it appears the files from one project are not accessible from the terminal of another project. I.e. the only R files accessible are in /cloud/project, but that is for the present project, and other projects I own are not accesible. I presume that there's one Linux virtual OS for each RStudio project.

p.s This project was shared with me by a student who encountered the same problem. Here is a screenshot of what it was like for him, which is exactly how it was for me. 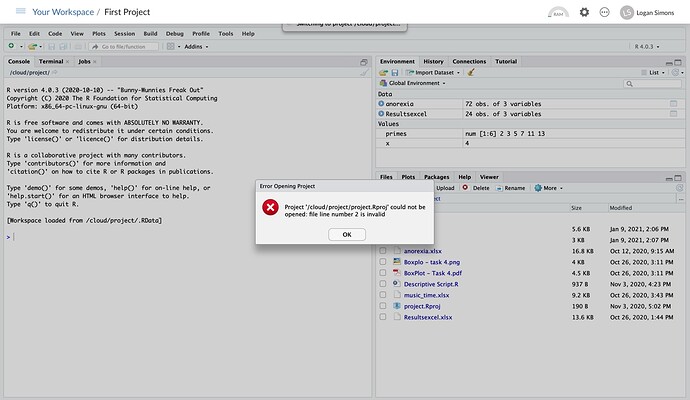 Hello everyone, I have taken my notes on codes on R project however now I cannot open the project anymore as it keeps giving me the error about 'line number 3 being invalid'. Does anybody know how I can solve this and access my notes on the R file? The project: https://rstudio.cloud/project/626879 The error: [image]

In the thread suggested by @pieterjanvc, the suggestion is to open the .Rproj file to see what the problem is and fix it if possible. I can't even get that far. I can't open any file. The RStudio session does not start: The popup error occurs, it attempts to restart, the popup occurs again, and it attempts to restart again, and so on. There's no means to open a file.

Is this still an issue? If so, can you share the id for your project? I can take a look.

Hi @samp, Yes, it is still an issue.
Here is the project URL (it was shared with me by a student in my statistics class):
https://rstudio.cloud/project/1724892

Looks like your project.Rproj file was overwritten with an R script at some point. I've repaired the file (and moved the old contents in project.Rproj.old.

Let me know if you still have trouble with that project.

Hi @samp, Fantastic! Thank you so much for the help.