Remove rows with a unique value in one column? Help

EDIT: I HAVE FOUND THE SOLUTION, SEE BELOW.

Apologies if this is a bit of a stupid question or if I've not used the correct terminology but I'm very new to this stuff. In fact I've reworded this whole box many-times so I'm hoping it actually makes sense.

The data-set I am using is very large. Its purpose is to show conflicts between countries. I will note what the columns are called and what they mean.

I want to produce a new data-set which removes all of the rows where the dispnum is unique (i.e. not shared by another row).

The end goal is to basically show if the number of disputes between US-China has increased/decreased over the years but need to get through this stage first! Where it is such a big dataset I'm trying to do this in the easiest way possible. A screenshot from the set is below and as you can see there are two rows which have the same dispnum. I would ideally just like to produce a new sheet which shows only those two rows which have the same dispnum (or something along those lines...) is it possible? 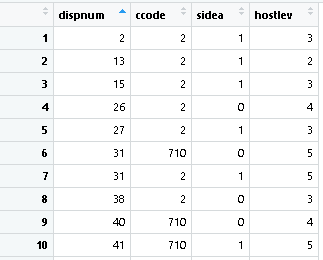 See the FAQ: How to do a minimal reproducible example reprex for beginners.

This may not work because it was not run against data.