Replace NA values with the most appropriate values to avoid bias

I am contacting you about the missing values in my dataset.

To give you a context, I surveyed pitfall traps last summer to capture ground beetles. I did 7 surveys at 29 sites. However, several sites were destroyed by cows, which meant that not all sites had 7 surveys, but sometimes 4, 5 or 6 surveys.

I did a rarefaction curve with the 3 different habitats and apparently the "unwooded pasture" habitat has a problem in terms of under-sampling. If I ignore my missing data, there may be a bias with the statistical models. Here is the code used: 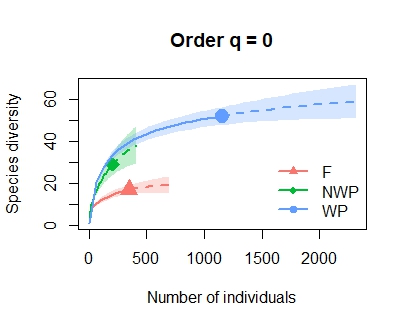 Below is the table with the missing data.

My table is composed as follows: the first column shows the name of the study sites written 7 times each (because 7 trap surveys). The top row is the species name and the cells in the table are the abundance of the species in question according to the survey site at a certain survey.

I would therefore like to replace the NA lines with values that do not lead to bias for inclusion in statistical models.

I have seen that there are different packages like Amelia and mice that take into account the NA values and replace them. In the examples I saw, there were NA values here and there, but never complete lines as in my case. So I could not reproduce the examples successfully. I guess I would have to replace my NA values, but taking into account the values already obtained in the study site in question. Can you please give me a hint or a code that allows me to replace my missing values in the best way?

Thank you for your feedback and I look forward to your reply,

Thank you for the link. Using this taskview, I first used the missCompare package, to see which test is most appropriate to replace my na values. But following this tutorial (GitHub - Tirgit/missCompare: missCompare R package - intuitive missing data imputation framework), it is impossible for me to get to the end.

An error message appears: No need for mice. This data set is completely observed. Error in stats::hclust(d, method = "ward.D") :
n >= 2 objects are needed for a classification
In addition: Warning message:
In stats::cor(X, use = "pairwise.complete.obs", method = "pearson") :
the standard deviation is zero

The fact that the NA are whole rows seems to be a problem. Do you have an idea how to avoid this problem and let me know which imputation test to use?