Apologies if I'm using the wrong or incorrect lingo/terminology, but this is exactly the same issue reported in this issue from 1.5 months ago:
https://community.rstudio.com/t/rmarkdown-does-not-show-outputs/126715

The specific steps to generate the issue are:

the generated html document won't contain the result of the r code, but will just contain the string literals, i.e.

the generated html document won't contain the result of the r code, but will just contain the string literals, i.e.

This seems like an issue in how the code chunk is seen.
Can you open the document in the visual editor of RStudio IDE and check that it is seen as a code chunk ?

If you mean the raw Rmd code, here's a screenshot of it. I believe that the visual editor is recognizing that it's R code: 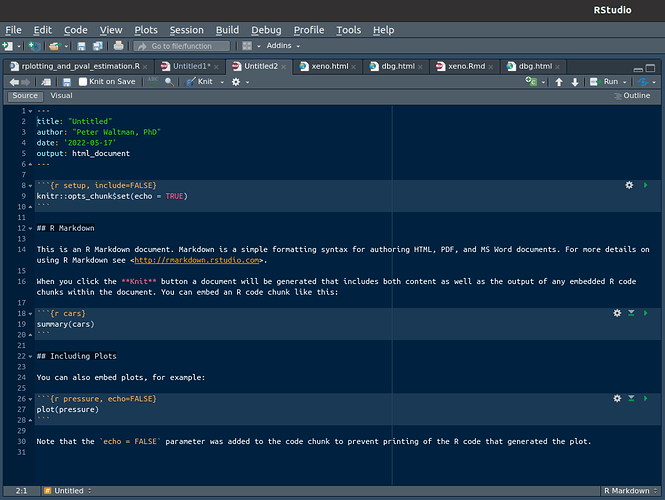 Unfortunately, I can't share the html file that gets generated, as I can't share html files, but here's a link to a copy on dropbox: https://www.dropbox.com/s/8jt8rylqv56gpmz/dbg.html?dl=0

(viewing allowed, but not editting)

Also, this is one of the relevant code snippets from the html file:

Unfortunately, I can't reproduce using last version of everything.

Can you open the document in the visual editor of RStudio IDE and check that it is seen as a code chunk ?

I meant clicking on the button "visual" next to "source" to activate the visual editor mode.

Also can you save the document ? I see its is called Untitled2.

Somehow the chunks are not correctly processed.

Can you try rendering using rmarkdown::render() function in your R console to see if you get the same results ?

Other hint:
Can you update to latest RStudio version or even try a daily version https://dailies.rstudio.com/ to test if the IDE is related to your issue.

Sure, here's what it looks like in visual mode (apologies, I'd missed that option in the window):

From what it looks like, it recognizes the code chunks as code chunks, but doesn't automatically execute the code, but give me the ability to manually execute it.

Here's a before image: 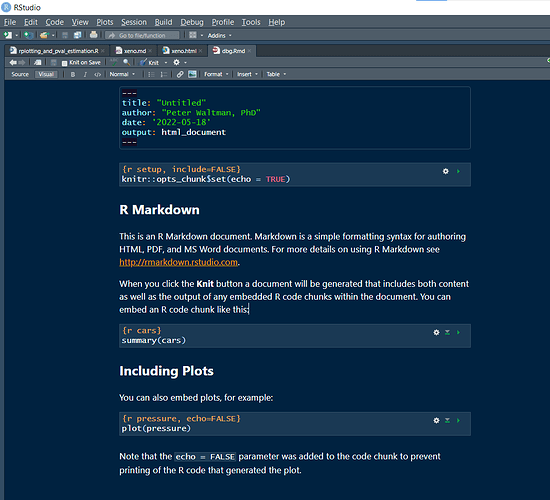 And here's an image after I manually execute one of the chunks: 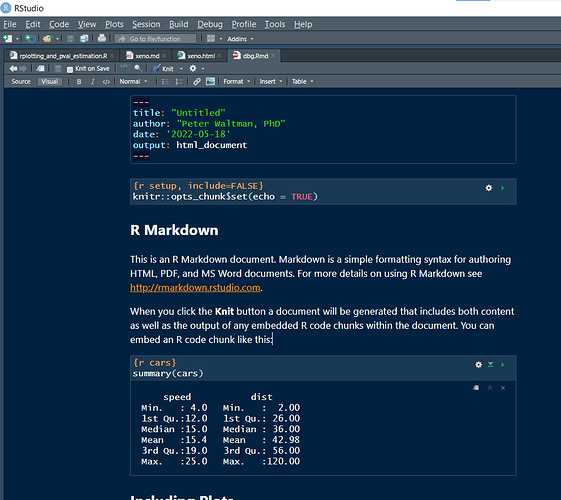 I checked to see if there was a settings for automatically executing the code, and found this previous post, but it looks like the settings are set correctly in my Rstudio instance. 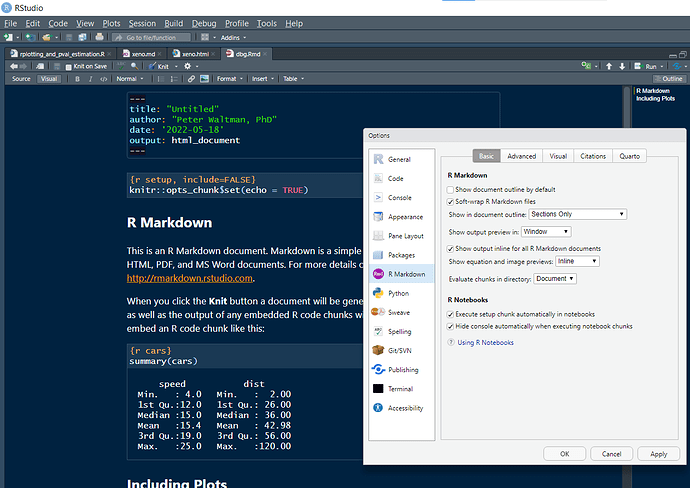 All the previous screenshots were with the default Rstudio version.

I was getting the same behavior with the daily, but I realize now that it was an issue of the order of operations.

If I save it as .Rmd file (dbg.Rmd), and THEN knit the document, it produces an html file (dbg.html) that contains the output from the R code as expected.

However, if I do what I was doing initially, and knit the document before saving it as an .Rmd file, I'm given a choice of saving the file. If I opt to save it as dbg.html, Rstudio doesn't process the embedded R code chunks when it saves the file. (However, if I save it as an .Rmd when I choose to knit the unsaved doc, the html file is produced as expected (containing the results of the code chunks)).

This makes sense now that think of it, but obviously, I was confused about the correct process to render the R markdown.

If I opt to save it as dbg.html, Rstudio doesn't process the embedded R code chunks when it saves the file. (However, if I save it as an .Rmd when I choose to knit the unsaved doc, the html file is produced as expected (containing the results of the code chunks)).

Oh that is why. This is because knitr is seing a HTML file as source, and it won't process the code chunk syntax used as markdown. For knitting a HTML file, there is another syntax. But .Rmd is the recommended way.

So conclusion: the file to render needs to be a .Rmd file.