ROC and AUC metrics in Caret

When evaluating model performance using caret (cross-validation) one gets outputs like this: 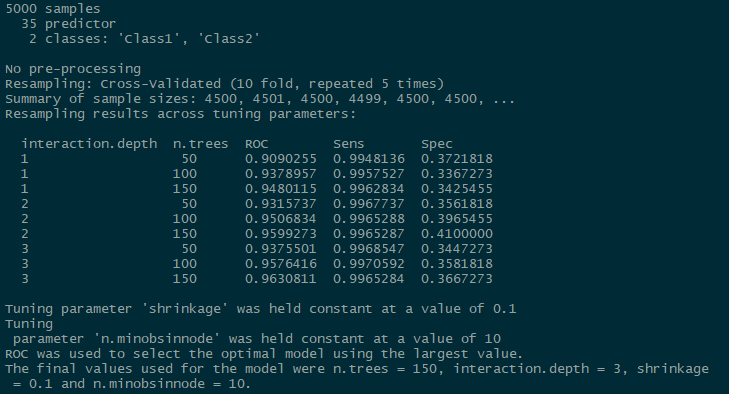 I am confused on how to interpret the ROC column values. I understand that ROC is a curve and AUC a number (area under the curve).

In the picture above the ROC values are the AUC values? If not, what is the diference between ROC and AUC values?

Documentation for the caret package.

For classification, ROC curve analysis is conducted on each predictor. For two class problems, a series of cutoffs is applied to the predictor data to predict the class. The sensitivity and specificity are computed for each cutoff and the ROC curve is computed. The trapezoidal rule is used to compute the area under the ROC curve. This area is used as the measure of variable importance. For multi-class outcomes, the problem is decomposed into all pair-wise problems and the area under the curve is calculated for each class pair (i.e. class 1 vs. class 2, class 2 vs. class 3 etc.). For a specific class, the maximum area under the curve across the relevant pair-wise AUC’s is used as the variable importance measure.

From Measures for Class Probabilities

For data with two classes, there are specialized functions for measuring model performance. First, the twoClassSummary function computes the area under the ROC curve and the specificity and sensitivity under the 50% cutoff. Note that:

Also some nice figures re. ROC Curve vs AUC in this tutorial here:
https://developers.google.com/machine-learning/crash-course/classification/roc-and-auc