I recently updated to R 4.2. and RStudio 2022.02.2-485. When changing the appearance to a dark theme (e.g. Abdal Black Hackers 2), some parts in RStudio's "Files" or "Packages" pane are oddly displayed. As you see in the image below, e.g. the names of the packages are in a kind of hyperlink blue instead of white. The same is also with the names of the folders and files in the files pane. 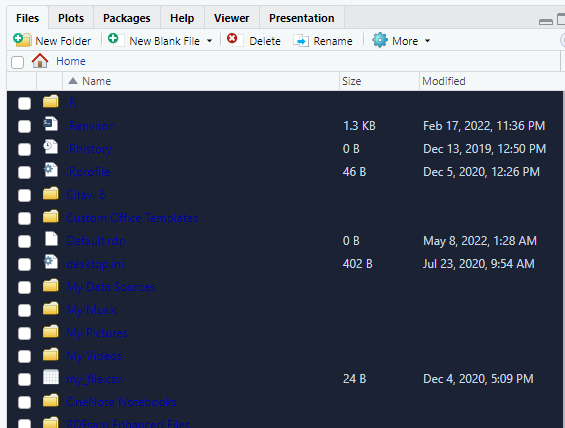 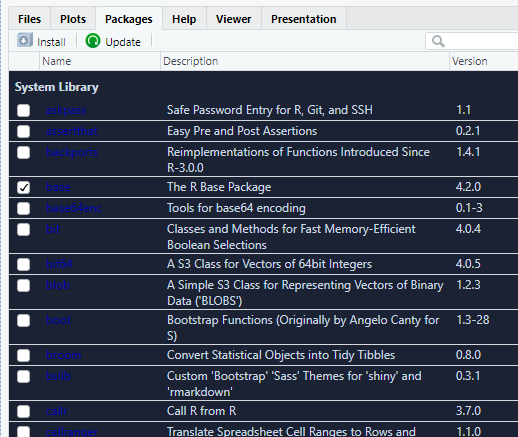 I started to notice the issue after having used the "rsthemes" package which did not darken RStudio as intended (here the issue which I filed with the package's maintainer). But after having deinstalled the rsthemes packages, reinstalled R and RStudio the issue with the wrong appearance of the file and packages pane remains.

I can only assume that the reason why rsthemes didn't work properly is due to the same cause which doesn't render the appearance of the files and packages pane properly.

Any idea what I could do to resolve this issue? Many thanks.

A quick addition (without claiming that I have any solid understanding of these things): It seems to me the issue is related to this property in RStudio's css 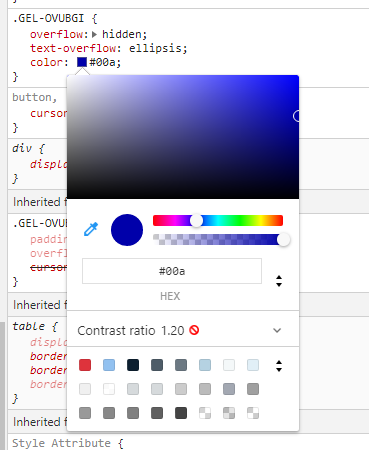 I have exactly the same problem with RStudio 2022.02.01 Build 461. Have you found workaround for this issue?

Worth to note, that on my other laptop with the same RStudio version (same operation system) the appearance works well so I couldnt reproduce the issue.

Right click on a given filename from right bottom box, click Inspect element and set the color code.

I assume this is not a permanent solution. Just reopen the RStudio and the issue reappears.

By now there is an open issue pending at RStudio's repository. You might want to flag there that you are also experiencing the issue.

<!-- IMPORTANT: Please fill out this template fully! Failure to do so will resu…lt in the issue being closed automatically. This issue tracker is for bugs and feature requests in the RStudio IDE. If you're having trouble with R itself or an R package, see https://www.r-project.org/help.html, and if you want to ask a question rather than report a bug, go to https://community.rstudio.com/. Finally, if you use RStudio Server Pro, get in touch with our Pro support team at support@rstudio.com. --> ### System details RStudio Edition : Desktop RStudio Version : 2022.02.2 Build 485 OS Version : Windows 11 R Version : 4.2.0 ### Steps to reproduce the problem 1. Fresh installation of Windows 11 2. Applying all Windows updates 3. Installation of R 4.2.0 4. Installation of R Studio 2022.02.2 Build 485 5. Selecting a dark editor theme, such as "Idle Fingers" ### Describe the problem in detail After a fresh installation of Windows 11 and the newest R Studio version, I can only switch to a dark editor theme, but the GUI elements stay in the light theme. Also, the text in the "Files" pane can hardly be read. ![image](https://user-images.githubusercontent.com/28808801/167791191-8b98adf1-824d-4694-b202-bd957473152e.png) I tried reinstalling several times, but it didn't help. ### Describe the behavior you expected The GUI elements should also switch to dark mode, like this: ![image](https://user-images.githubusercontent.com/28808801/167792094-4cfa1d7e-17fd-42cf-8c68-d4f34df1e7e8.png) <!-- Please keep the below portion in your issue, and check `[x]` the applicable boxes. --> - [x] I have read the guide for [submitting good bug reports](https://github.com/rstudio/rstudio/wiki/Writing-Good-Bug-Reports). - [x] I have installed the latest version of RStudio, and confirmed that the issue still persists. - [ ] If I am reporting an RStudio crash, I have included a [diagnostics report](https://support.rstudio.com/hc/en-us/articles/200321257-Running-a-Diagnostics-Report). - [x] I have done my best to include a minimal, self-contained set of instructions for consistently reproducing the issue.