setting the class of dicotomic outcome in glm function

I am having an issue with the interpration of glm function.
Let's consider this df

and then I reassess variables classes

Now I fit my regression

My question: should the dicotomic outcome (alive) be expressed in logical class or in numeric class ( 0 / 1)? And if it is numeric class, should be "no outcome" = 0 and
"yes outcome"= 1 ?

I am having trouble with my real life dataset, because I get strange odds ratio ( the opposite for what I expected, and I am afraid I am missing something.

Compared to the example in the reprex, in my real life dataset is like if I would have <1 estimated odds ratio, even if I am sure that increasing age is a risk factor for mortality.

Thanks in advance for your help!

even if I am sure that increasing age is a risk factor for mortality.

but for the very young it isnt ...
http://www.bandolier.org.uk/booth/Risk/dyingage.html

Are you trying to predict df$alive based on age alone? You have the variable df$sex but it is unused.

Your example data frame encodes a slightly increasing probability of being alive as age increases, which is probably the opposite of what your real-world data says. 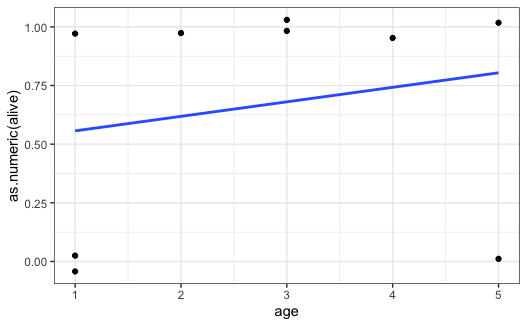 The predicted probability being alive will be the same whether you encode being "alive" as 1 and "dead" as 0 or the reverse. You just have to remember to also reverse the interpretation of the regression coefficients, odds, odds ratios, and probabilities.

For example, in the code below, we show that inverting FALSE and TRUE (so that TRUE switches from meaning "alive" to meaning "dead") inverts the odds.

If you expect to switch back and forth between which outcome is 0 and which is 1, to avoid confusion of the meaning of df$alive values it might be better to have the data values be meaningful words like "Alive" and "Dead" rather than logicals or the numbers 0 and 1 and encode the column as a factor. Then if you want to change the reference category you can just change the order of the levels.