Abstract: Upload a set of documents exemplifying your writing, and this app will compare the words you use most often to words in a reference corpus -- the words that you uniquely use most frequently are your cinnamon words!

The term "cinnamon word" comes from Ben Blatt's wonderful little treatise on data analysis of literature and writing, Nabokov's Favorite Word is Mauve. In the book, he shows how analytics — statistics' less committal and more creative cousin — can be used to direct us to interesting questions about writing. As the title suggests, one of his analyses focuses on the favorite words of famous authors. 'Cinnamon words' in particular are coined in reference to Ray Bradbury's love of the word cinnamon, which in turn comes from Bradbury's love of his grandmother's spice boxes. Blatt shows that we don't just have to take Bradbury's own observation for granted; according to his analysis, Ray Bradbury uses the word cinnamon 4.5 more often than it's seen in a reference.

What about those of us who haven't yet identified the deep childhood memories which define our writing? That is what I'm hoping my RShiny application, Shiny Cinnamon Words (SCW), can tell you.

Cinnamon words, as defined by Blatt, must meet the following set of requirements:

Since the original definition of cinnamon words was intended for established authors who already have a very extensive repertoire, for the sake of all the less established writers out there, I have defined an alternate set of requirements which I use in SCW. Given a set of uploaded documents, SCW takes into account the following:

I say "should" instead of "must," because in SCW, these are the default settings, and there are many opportunities for customization and flexibility for you to conduct your own analysis!

Getting your Cinnamon Words

Here's the landing page for the app, which you can find on my GitHub or hosted on shinyapps.io. Click on 'Get my cinnamon words!' to get started with uploading your text files. 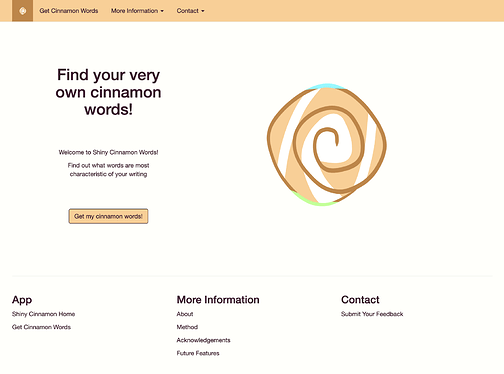 Then, you will be able to upload documents and select a reference corpus.

Given a set of uploaded documents, SCW will calculate the frequency at which every word appears in your document. The application also has a set of preloaded reference corpora which are used as a baseline measure of word frequencies in the English language, which it will then use to calculate a ratio of use, showing you which words in your set of uploaded documents are most frequently used compared to the reference. These are your cinnamon words!

Here is an example using sixteen of Plato's works from Project Gutenberg, translated by Benjamin Jowett as the sample text: 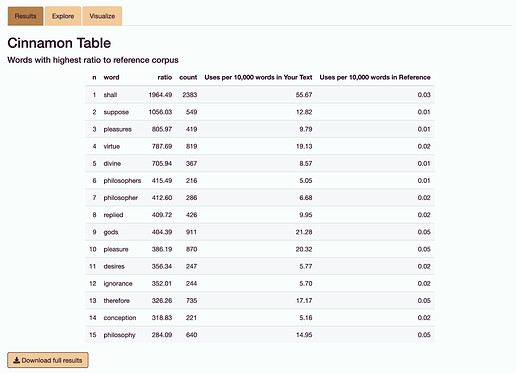 Beyond the table of your cinnamon words, you can also go to the 'Explore' tab, which allows you to search for any word in the uploaded text, powered by the DT package in R.

In the 'Visualize' tab, you will find plots which have been generated using your uploaded data. 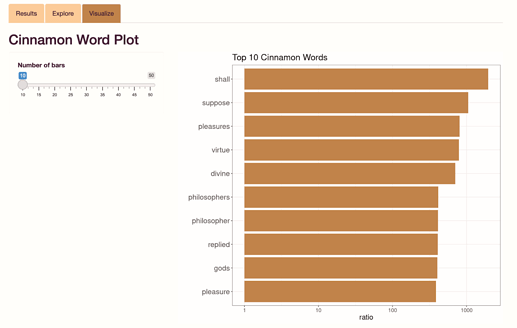 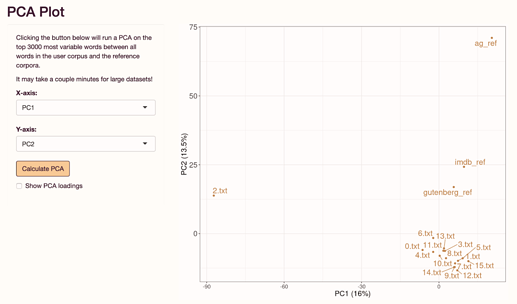 All other information you need to get started should be there on the app, so go try it out! 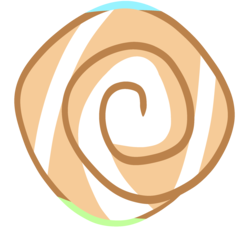