Classical epidemiology has focused on the control of confounding, but it is only recently that epidemiologists have started to focus on the bias produced by colliders. A collider for a certain pair of variables (e.g. an outcome Y and an exposure A) is a third variable (C) that is caused by both. In a directed acyclic graph (DAG), a collider is the variable in the middle of an inverted fork (i.e. the variable C in A → C ← Y). Controlling for, or conditioning an analysis on a collider (i.e. through stratification or regression) can introduce a spurious association between its causes. This potentially explains many paradoxical findings in the medical literature, where established risk factors for a particular outcome appear protective. We use an example from non-communicable disease epidemiology to contextualize and explain the effect of conditioning on a collider. We generate a dataset with 1000 observations and run Monte-Carlo simulations to estimate the effect of 24-h dietary sodium intake on systolic blood pressure, controlling for age, which acts as a confounder, and 24-h urinary protein excretion, which acts as a collider. We illustrate how adding a collider to a regression model introduces bias. Thus, to prevent paradoxical associations, epidemiologists estimating causal effects should be wary of conditioning on colliders. We provide R code in easy-to-read boxes throughout the manuscript, and a GitHub repository https://github.com/migariane/ColliderApp for the reader to reproduce our example. We also provide an educational web application allowing real-time interaction to visualize the paradoxical effect of conditioning on a collider https://watzile.shinyapps.io/EpiCollider/ 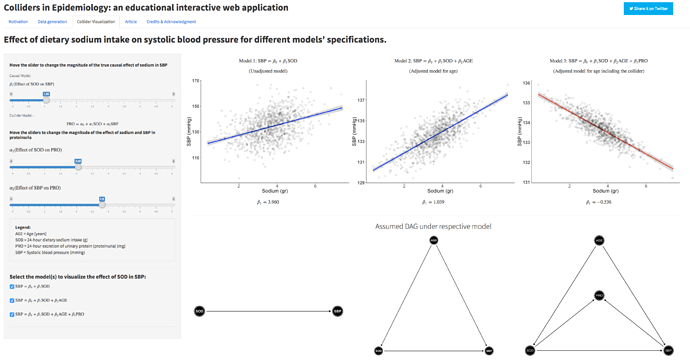 The link to the RStudio Cloud Project: https://rstudio.cloud/project/163738

This topic was automatically closed 75 days after the last reply. New replies are no longer allowed.