Im trying to match the rows in df1 and df2 , the code:

so when v1 and v2 match in both df1 and df2 it mutates COE and otherwise 0, same for lead

so when v1 and v2 match in both df1 and df2 it mutates COE and otherwise 0, same for lead

I am not sure I follow. Would you mind following up with additional clarity as to exactly what you're trying to do with this and ifelse statement or something else?.

The values in v1 and v2 in correct are integers, but appear at characters in df1 and df2. So it's hard to use that as a guide for the operations required to go from your initial two data frames to correct.

As nirgrahamuk mentioned in ifelse statement or something else?, set operations like those discussed in 13 Relational data | R for Data Science are a good way to approach this problem. For example, ``` r

So what i want is something that looks at each row in the columns v1 and v2 for df1 and df2. if they match then we add a column named "rule" and in that column we write "COE" (its a business rule). else we add 0 in the rule column.. (its the mutate func in the original post).

i used the ifelse condition and the & operator, in "regeltest" at the original post and got the result:

I think what you're looking for is:

== is an operator meaning something like "exactly equal to"

Maybe running something like this can help illustrate the difference:

ps I personally would avoid doing this comparison across separate dataframes. Why not join or bind the data you need? It's much easier to verify the integrity and do any error checking, etc.

one problem with that as I see it, it check for matches row wise: 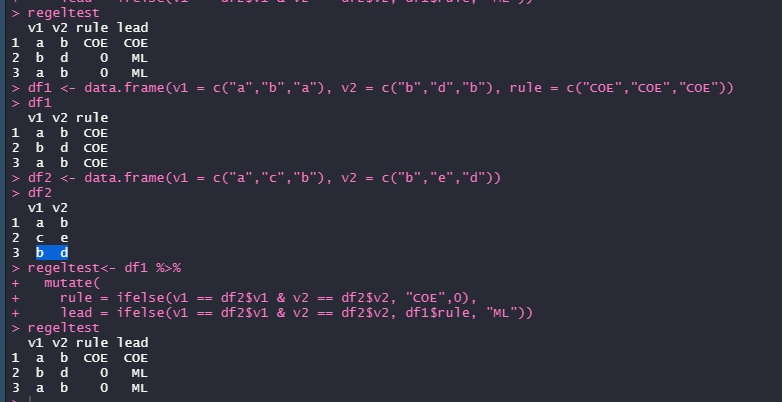 why bind the data - like row bind or ? how would u do it?

one problem with that as I see it, it check for matches row wise:

Yes. Sorry. I thought this is what you were trying to do. Earlier you said:

Im trying to match the rows

Are you trying to match the row-wise combination of v1 and v2 to any row in the second dataframe?

Does that sound right?

"Are you trying to match the row-wise combination of v1 and v2 to any row in the second dataframe?"

Yes that is correct

Yes that is correct

Got it. In this case, I'd look at the various dplyr join functions.

This will find any cases where v1 and v2 both match between the two data frames. It will keep all values.

I'm not sure exactly of your further needs, but I think this is a good first step. You can then apply the rules you need, and you have the data together in one df.

(To stay as close to your original conception as possible, you could mutate() a new variable in each df using paste0. That would look something like the below. I'd definitely follow the join path outlined above though.

The intersect function works but i'm only getting the intersect as output, is it possible to combine intersect with ifelse statement?

It's a bit tricky to write a good mutate() statement without knowing what the actual data might be like.

However, if you do the full join I suggested above, you would get:

You see the "NA" under rule because those rows were in df2, but not df1, and df1 does not have a "rule" column.

If the data were to be like this you could replace the NA with a 0, in a variety of ways. For example:

You could make a similar mutate() statement to generate your lead variable.

If I were doing this (but this is biased toward the work I do) I would add a marker to each dataframe, then join them. Something like this:

(I'm also using tibble() to create the dataframe/tibble, since again, this is what I would do.)

Anyway, you get this:

Then you can write your mutate functions along the lines of:

I hope that helps.