Hi. I am working on replicating some Stata margins commands in R, and I was wondering if there is an easy way to find a single point prediction at a specified high and low value of a variable. In Stata, the output looks like this: 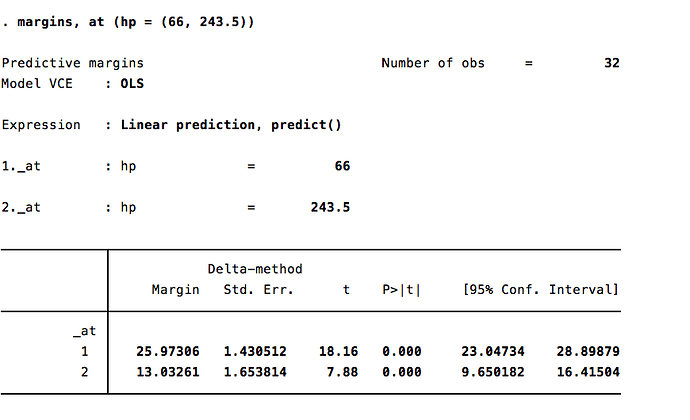 The "Margin" displayed in the table is the predicted value of the dependent variable when hp is equal to first 66 (case 1) and then 243.5 (case 2) for all of the data points. In R, the default output of the corresponding margins command is to instead give the Average Marginal Effect (AME) of a 1 unit change in the variable of interest. Thus, it is possible to replicate the Stata results (see reprex below using an example from the built-in mtcars dataset) by manually calculating the point prediction for each observation. I did this by first multiplying the AME by the change in the variable of interest resulting from mandating it at a certain value, and next adding that to the dependent variable for that observation. Finally, I took the average of these calculations for all data points to get the final result displayed by Stata. I am wondering, though, if there is a built-in function to have R simply output these results just like Stata does to avoid the manual calculation? I can not seem to find it online. Thank you for the help!

Note: this is an attempt to break down my larger, related problem which I posted about here.

Hi,
You are using a programming language, so if you want to automate a process just write an script. Above, in your own post you have write a script, then, convert your scrip to a function.
Do you understand? In fact you could automate whatever you want