straf: a toolkit for forensic genetics

Abstract: straf is an application for the analysis of genetic markers in forensics, for example for parental testing or criminal investigations. It does quality control of the data and characterises genetic diversity and relatedness of the samples.

straf (STR Analysis for Forensics) is a web application dedicated to the analysis of genetic markers (called STRs) in a forensic science context. STRs are an extremely popular type of genetic markers used in routine to characterize the DNA of individuals. Forensic geneticists typically gather the DNA of a large sample of individuals in their countries, characterize them genetically in order to create a reference population. These populations are then used in forensic practice, for example for parental testing or criminal investigations. The application allows geneticists to assess the quality of their data and characterise the genetic diversity and relatedness of the populations they are interested in.

The story behind straf

straf’s story is a tale of two disciplines: forensic and population genetics, having a lot in common. For example, DNA profiling, used in criminal investigations or parental testing, aims at matching different DNA samples and understanding how related they are in terms of DNA. In population genetics, a common goal is to characterise the genetic diversity of a set of populations, by looking at how related individuals are within and between populations. Both fields aim at understandind the relatedness of individuals based on their DNA.

There was a strong need for such an application in forensics. Forensics parameters (metrics to be computed for any genetic dataset) were typically computed by geneticists by using an old spreadsheet that had been created by one of the suppliers of an assay used to genotype samples. This spreadsheet was convenient because it was based on Microsoft Excel, hence anyone could use it. It has been since then removed from the Internet, and forensic geneticists started sharing this spreadsheet among each other, circulating it almost secretly, “under the cloak” as French speakers would say. As R was very popular in population genetics, Alexandre and Martin felt that something could be done to save the forensics community!

A few weeks later, straf was born, and after four year, straf had become a widely used tool by the forensics community. The positive reception of the software in the community motivated its development over the years until the release of straf 2.0 in 2021. straf’s story highlights the importance of communication between fields.

Details about the implementation

Impact on the community 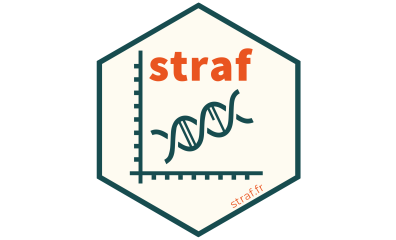 I do not understand genetics. But this is one of the apps I liked because

Have you given a thought to the possibility of downloading the analyses as report (html/word/pdf) or sending the report as email?

To your point on generating a report, there was actually the possibility to download a PDF/Word report in a very early version of the app, but I then decided to prioritise other features and never got back to it.

Your comment reminded me that some code existed somewhere for report creation, so I might finally consider implementing it! I'm pretty sure it would be helpful to the community and would help getting a snapshot of an analysis. Thank you