Tidy data: One standard or two?

I am confused about some aspects of the definition of tidy data, particularly as applied to time series. Suppose I have observation of a number of different variables for each period. Usually I would think of this as a rectangular array, with the first value probably a date, an observation number, or some other unique identifier, and the other variables in columns. That seems to correspond to the definition of a tidy data set, with one column for each variable.

But it seems like for a lot of purposes, especially with respect to graphing with ggplot, it is preferable to use “long format,” where all the variable values are in a single column and we have a column for value type with n values, in place of n distinct variables in n columns.

What is confusing me is that Hadley has stated in several places that tidy data constitutes a way of putting all your data into a unique standardized format. That makes me think that one of these formats is not considered tidy. Based on his expository definitions, I’d say the wide format was the tidy one. But when I look at the format that is easiest to use with several tidyverse tools, I’d say it was the narrow format. That is not always true – purrr, for example, seems to prefer a wide format as a way of organizing the subsets of your data that it acts on – but it is often true.

To me, it seems that this ambiguity is potentially troubling, especially as more and more people are writing packages based on data manipulation procedures advertised as tidy. Are there two tidy standards, or just one?

I’d welcome any clarifying thoughts on this.

Based on my time series experience, my possibly fuzzy understanding is that each time increment is an observation of one or more variables.

The x-axis is the value of the time increment, and the y-axis is one or more layers with the related variable values.

There is not a single, unique definition as to what is tidy. As a general rule, each row should be a unique observation. However, your unit of observation may differ for different analyses. I might want to answer a question for which the correct unit of observation is a unique patient. I might later want to answer a different question for which the correct unit of observation is a unique patient encounter. In the second case, each patient will appear multiple times in a taller dataset. In each case, the data are tidy, in that there is only one observation per row, but the unit of observation has changed.
Most of the time, tidying a dataset means that we will make it taller. In part, this is because most people faced with a blank spreadsheet will enter their data for their first observations in a single column, then, for subsequent observations, will add new columns from left to right. The tidyr package gives us tools to tidy this common data issue, usually with pivot_longer.

Thanks for your thoughts, technocrat. I agree that one observation per period is the common intuitive way of arranging time series, unless the data is panel-like.

However, I think it worth observing that the architecture of ggplot was designed before the tidy data concept was clearly enunciated. I am hoping that more experienced programmers can tell me whether, once we move on to explicitly tidy functional design, this three column long format remains the preferred, or easiest, or most-tidy way of arranging data. When I think about dplyr functions, for instance, it seems like the "one column per variable type" representation is more natural and "tidier." But I am not sure I am right about this.

Thanks, phiggins! I quite agree that a single underlying data set data set may support multiple data structures with different units of observation. But this is not the focus of my question. Every time series data set with multiple variables can be represented in a wide "one column per variable" format, or in a three-column long format with a date column, a variable type column, and a data column. See my reply to technocrat for a more complete discussion. My question is: Should the three-column long format always be preferred, or should the column-for-each-variable format be preferred for all purposes other than graphing with the ggplot family of of packages? Or is there some other dividing line I haven't thought of?

Could we reify the discussion with a reproducible example, called a reprex?

Note: My "." suffixes, inspired by Hadley's . prefixes, are just a way of
making short words that are often already functions or variables into my own
unique variable or function names. They have no meaning beyond that.'

You can not do this with the wide format, I'm pretty sure, because there is no
way to specify the key to uniquely identify each time/variable combination
when there are multiple variables on one row.

For a countervailing argument, the vctrs rules seem designed to discourage
long formats like this, since values in the value column are neither coerced
to a common type nor allowed to have different types. I don't see any way
that tsibble can handle numeric and non-numeric values in the same dataset.

I still don't understand how the formatting rules here differ from stackoverflow. My apologies.

I still don't understand how the formatting rules here differ from stackoverflow. My apologies

FAQ: How to format your code Guides & FAQs

Formatting Code: the Basics All code or console output you include in your posts should be formatted properly. Luckily, this is very easy to do! Just use the code formatting button at the top of the post editing box: [image] Select some code Click the </> button! The code formatting button automatically adds special Markdown formatting symbols to whatever you selected. If you check the preview pane to the right of your post, you'll see that the forum software now outputs nicely formatted code

. [04] The code formatting button is pretty smart! It can tell the difference between snippets of code that are part of a sentence and blocks of code that stand alone. So…

Thanks for making the issue more concrete for me, @andrewH.

I'll begin with the Gospel of @hadley in #RForDataScientists, using the via negativa in R for Data Science

Before we continue on to other topics, it’s worth talking briefly about non-tidy data. Earlier in the chapter, I used the pejorative term “messy” to refer to non-tidy data. That’s an oversimplification: there are lots of useful and well-founded data structures that are not tidy data. There are two main reasons to use other data structures:
Alternative representations may have substantial performance or space advantages.
Specialised fields have evolved their own conventions for storing data that may be quite different to the conventions of tidy data.
Either of these reasons means you’ll need something other than a tibble (or data frame). If your data does fit naturally into a rectangular structure composed of observations and variables, I think tidy data should be your default choice. But there are good reasons to use other structures; tidy data is not the only way.
If you’d like to learn more about non-tidy data, I’d highly recommend this thoughtful blog post by Jeff Leek

Taking the Nicosian Creed approach of what does constitute tidy, from the same Gospel

The key definition (forgive me my sins, for I came here originally from the law) is observation, which I can't find in the online version

Therefore, I think, there is no inconsistency between "tidy" and `a rectangular array, with the first value probably a date, an observation number, or some other unique identifier, and the other variables in columns'.

As to whether this raises an obstacle to ggplot, in particular, it seems a non-issue.

To apply the ggplot grammar of graphics to tb_wide is not problematic due to layers., appropriate care being taken not to mix continuous and discrete variables without further intervention. 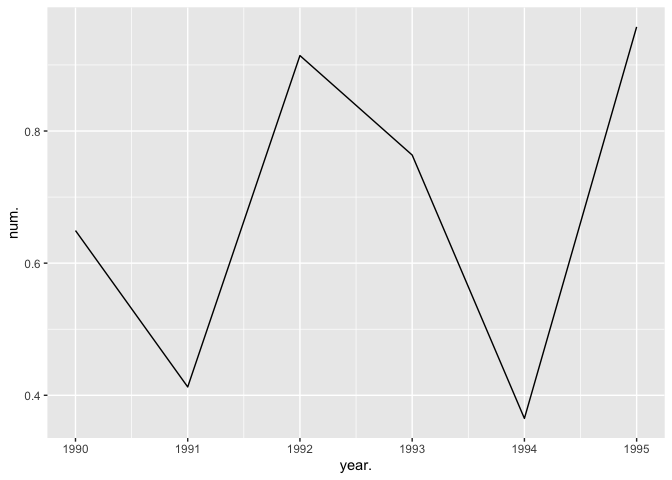 As for tstibble, I don't see why the class changes anything. The underlying problem is the mix of num, txt and fact objects, of which the second and third cannot be property coerced to num.

The approach, when coercion is unavailable would seem to be facet or glob.

As always, I may be wrongheaded, but does this advance the question?

Since you mention the Gospel of Hadley I would like to point out that the tidy data idea is very close to the subject of database normalization, so help me Codd.

This was a hot topic in the seventies and eighties, when disk space was expensive, and technology constraints were felt more acutely than they are now.