Trying to add values to an existing 1D table

The specific goal I have is this: take a 1D table of frequencies [created with table()] that has many categories, and create a version that condenses the smaller categories into a combined "Other" category. So, for example, take the table

and convert it to

by summing the entries C & D into the Other category.

More generally, as you'll see in the code sample, I'm trying to either concatenate two existing 1D tables together, or add a value/entry to an existing 1D table through a statement akin to addtablevalue("Other" = 3). Ideally I'd find a way to use both approaches.

My code sample below includes what I thought would work but didn't, and an approach that get the job done but feel a little kludgy. Hoping there's a way that avoids a having to convert among types.

(Apologies if this is a bit long, because I took it straight from the notes I was keeping.)

So as the notes suggest, it just seems there should be a way to do this that involves less steps and keeps the data in the normal table format throughout.

Thanks for any help!

Thanks. Unfortunately, while that saves a step, it still has the same issue with producing a table in non-standard format:

Edit to add: It's frustrating, because it seems like it should work, but it doesn't! Maybe it's actually a bug?

See the FAQ: How to do a minimal reproducible example reprex for beginners. Having a reprex in a single chunk avoids potential tl;dr.

See the examples in help("barplot") 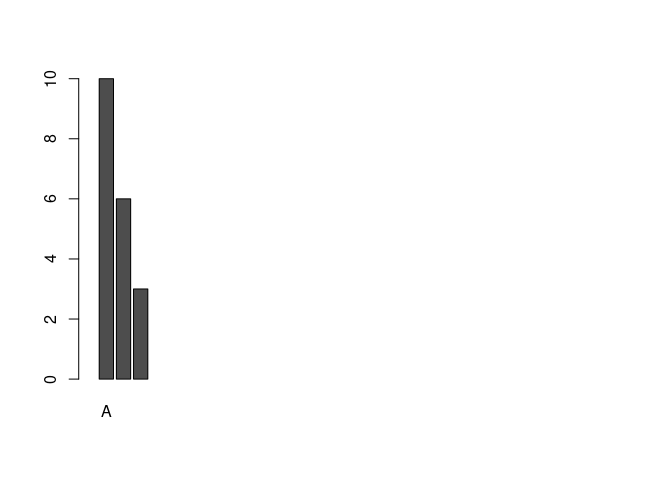 Thanks again. The t() workaround does indeed work for the barplot, so thanks for that tip. I hadn't tried that approach.

But my real goal is to have the table end up in the standard format it has when first generated from a factor or character variable with table(). I actually found that barplot(tmain) works (see snippet below), and the combination of table() applied to a character/factor variable, with the result fed unaltered to barplot, is one I've used successfully in the past. But after adding the new entry that no longer works. I'm just trying to have the table stay in the exact same format when I add the additional value to to it. That is, have the original structure

rather than the modified

Notice that the modified table has lost the "(1d)" label from the vector, and the names are now stored directly as a character vector rather than being embedded in a list as in the original.

I should say, I don't expect you or anyone else to spend any real time trying to solve this when a few workarounds already exist. I was just hoping someone would know off the top of their head the "right" function that would do this in one step. The main motivation for that is the code will be used by students, and the fewer extra steps the less explanation is needed and the less confusing it is for them to follow.

As a guess, table was never intended to be subjected to subsetting. Although a subset returns a table object, the format doesn't completely carry over. A round trip through table cures that, but as.table doesn't.

A go figure, I guess.