use a different r version temporarily in rstudio

I have installed an older R version using the source on a mac, but I am finding it difficult to get Rstudio to see this version. Is there an easy way to enable this

Can you see your R version under this menu in global options? 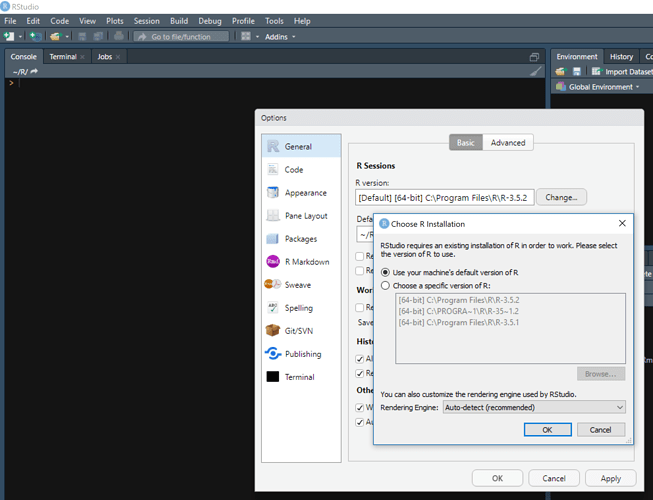 Did this system variable Sys.getenv('R_HOME') correspond to the path to your desired R version?

I don't see the choose R sessions, my version details are

The R_HOME environment variable points to the right version but setting that variable changes nothing!

I'm also on Mojave RStudio Version 1.2.1194 and it does not have the Choose R Installation that the screenshot from a Windows version does.

Do I understand correctly that you have both 3.5.2 and 3.4.1, but you want to be able to have R downversion?

Have you tried using R Switch?

The binaries are available at https://r.research.att.com/

technocrat: you are correct, but I want to be able to switch between two different versions of R not downgrade permanently

mara: I have tried R switch but I had to install version 3.4.1 from source and Rswitch looks for the R version in /Library/Frameworks/ and is not able to find the source installation. I am also not finding a way to ask it to look in a different location.

This article talks about how to use a different version of R with RStudio Desktop:

RStudio requires R version 2.11.1 or higher. Since R versions can be installed side-by-side on a system, RStudio needs to select which version of R to run against. The way this occurs varies betwee...

The procedure is indeed system dependent. Here’s an excerpt of the section on R compiled from source on macOS:

R from source (including MacPorts and Homebrew)

If RStudio is not able to locate R by scanning these locations, it will fall back to using whatever version of R is located at /Library/Frameworks/R.framework/ .

If you want to override the version of R selected by RStudio's default behavior then you can set the RSTUDIO_WHICH_R environment variable to the R executable that you want to run against. For example, to force RStudio to use the R executable located at /usr/local/bin :

Note that in order for RStudio to see this environment variable it needs to be launched from a terminal where the variable has been set to the desired value and exported.