My updates to the README in my RStudio project are no longer updating the top level of Election Vote Counting with Safety Features • SafeVote. Quite possibly I have forgotten the sequence of steps which had worked for me in the past, or I have done something to muck up the workflow settings (either in RStudio or in github), or... well I'm now totally confused and would greatly appreciate assistance!

Here's what I do know: On some (but not all) of my recent attempts to update my github website, I see a couple of console warnings, informing me that pkgdown "Could not convert TeX math ...". Screenshot below. 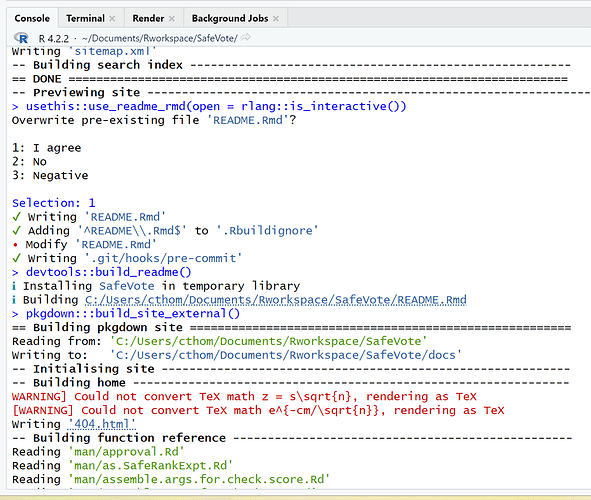 In the Render pane I see some output (apparently produced by pandoc):

Here are my current points of confusion:

Can you help? I'm pretty much out of ideas on what else I might try.

Please understand that it's my first experience with RStudio.

I hasten to add that -- overall I am extremely impressed with the usability and the (apparently very low) defect-rate in RStudio -- works very nicely indeed! And... I do know that cross-platform workflows are fundamentally nasty: difficult to configure, and unmaintainable (unless the other platform is completely stable and AFAIK that's far from the case with github), and just about impossible to diagnose when things go wrong if (as is the case here) there are a bazillion settings which a naive (or overly "clever") luser might change, and then "forget" that they have changed. All to say that I'm happy that it's only the top-level of my SafeVote webarea that's giving me trouble... but it is the landing page so I do want to sort this out.

Is how I’d interpret it.

If it were me, I’d render from the source pane, confirm the datetime of the related HTML. That divides the problem into the two pieces—syntax in the source or clobbering in other parts of the workflow.

Hi technocrat, thanks for the prompt reply & suggestion!

I'm not sure what you mean by "render from the source pane". I see a knit affordance on the RStudio pane that displays README.Rmd. When I invoke knit, it renders the inline math (poorly) but without a warning message into a preview html, screenshot below.

Of possible relevance: the "Knit Directory" is the "Project Directory":

Also of possible relevance: there are "No parameters defined for the current R Markdown document":

Because the root cause may lie within pkgdown (rather than in how pkgdown has been configured, or called, by a workflow script), I have created
an issue there