Which tool is appropriate for interactive, editable, linked directed graphs?

This summer, I'm working on building a shiny app for the gfpop package.

A big part of the application should consist of two linked plots.

I'm having trouble choosing a good approach to creating one of those plots, so I'm posting here hoping for some wisdom/help/advice!

I'm trying to make an interactive plot of a directed graph. Nodes just have labels, but edges contain quite a bit of information (1 string and 6 numeric values).

Here's an example of a static version of that graph: 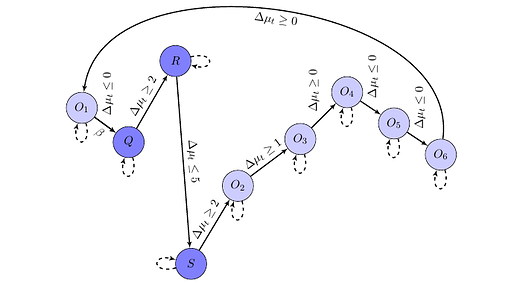 The kicker is that the plot needs to have two big features:

I haven't found any framework that supports both of these features, but here's what I've considered:

(More info in this issue in my repo)

This is probably the most reasonable solution right now. But there are a couple of barriers. One is that the package doesn't, by default, allow for edges to have big lists of parameters--that may be reasonably fixed, so I submitted an issue. The other is that I don't think there's any way to link a visNetwork plot with the plotly plot since it doesn't support crosstalk.

Using plotly would be fantastic since it can crosstalk with my other plotly visualization really easily. And shinyDAG seems to have successfully produced an editable directed graph with plotly, but it doesn't seem nearly as seamless and straightforward as visNetwork. But, it would be really great if I’m wrong about that and it is doable!

I’ve also considered trying to write exactly what I need in D3, building on this example, but it would be great if there’s an easier solution/existing tool. But if there’s not, please let me know!

Thanks for the nice detailed explanation of the issue you're facing. It helps a lot.
I think that visNetwork indeed might be the way to go for now. Here are a few of my thoughts/suggestions: