X and Y definition in t-test

Hello, I did an independent T-test with the variable of "sex and "Pknowledge". While the result is significant. I need to figure out which gender has higher Pknowledge.

The original data is imported from SPSS. So how do I know the definition of x and y in R? 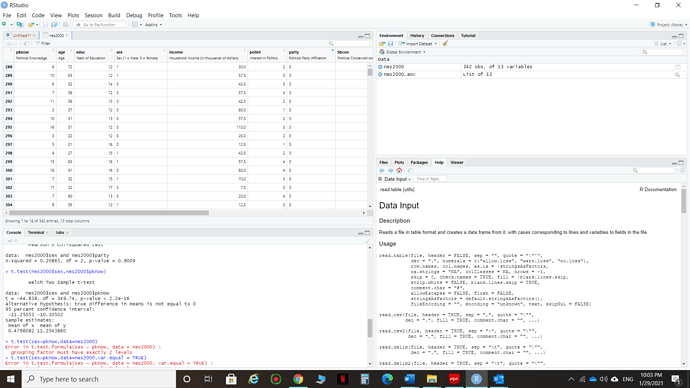 If you run ?t.test, you will get to the documentation for t.test, there you will see that the first argument is x and the second argument is y. If you are in doubt, you can also always specify which one is which by using something like this: t.test(x=group1, y=group2) .

Besides this, it also seems like your are not using the function correctly. When using t.test(x,y), you are comparing the mean of group x with the mean of group y. In your example, that means that you are comparing the mean of the variable sex with the mean Pknowledge, which is in no way a meaningful comparison.
In your second attempt you are doing it almost correct, the only mistake here is that you have the formula such as variable ~ group, in your case that would be t.test(Pknowledge ~ Sex, data=nes200). If you use this form, the output will even be coded according to your grouping variable.

It’s not really about renaming anything. In your example, you want to compare the political knowledge between the political knowledge between males and females and there are two ways to use the t.test function for such a comparison. The first way is to specify the two groups as x and y. For this, you would need two vectors, one with the ´Pknowledge ´ Values for all males and one with all the values for the females. Assuming that those vectors are named male and female, you could use t.test(x=male,y=female). This is what I meant when I gave the more generic example t.test(x=group1, y=group2).

Does this make sense to you?

Many thanks for the clarification.
Can you elaborate about the part of t.test(x=group1, y=group2)? With this command, I can only rename t.test(x=sex,y=pknowledge) right? I can't rename the sex column with x=1,y=2 right?