Error unexpected symbol how can I fix this ? 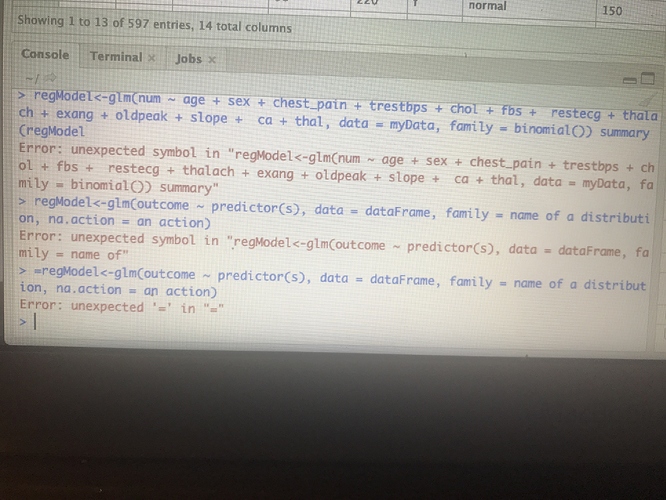 It is very difficult to work from an image. Please include a Reproducible Example in future questions.

A minimal reproducible example consists of the following items: A minimal dataset, necessary to reproduce the issue The minimal runnable code necessary to reproduce the issue, which can be run on the given dataset, and including the necessary information on the used packages. Let's quickly go over each one of these with examples: Minimal Dataset (Sample Data) You need to provide a dataframe that is small enough to be (reasonably) pasted on a post, but big enough to reproduce your issue. Let's say, as an example, that you are working with the iris dataframe head(iris) #> Sepal.Length Sepal.Width Petal.Length Petal.Width Species #> 1 5.1 3.5 1.4 0.2 …

In the image, the line that starts with

The second line of code sets the family argument of glm to name of a distribution, which is not a valid value. The value binomial() that was used previously is valid. Also, you cannot set na.action to an action. I would leave out that argument unless you know you need it.

The third line of code begins with =, which is not allowed.