I'm not really sure where to start debugging this, but in the last year I routinely have to wait a few minutes before RStudio becomes responsive after executing code chunks. This is not while RStudio is running a chunk but after chunks complete. I have grown accustomed to running beepr::beep() in the console to signal when RStudio is going to become responsive again.

These delays only seem to happen when RStudio is connected to a database, but I'm not sure how to diagnose or even detect the source of delays as they seem to happen randomly. I am at least sure it's not do to memory issue as the delays happen regardless of how much data I have pulled into memory.

Thanks for your report; we'll try to reproduce this. Could you give us a Reprex (Reproducible Example) that consistently shows this dely?

@MikeBess what would constitute a reprex in this case? Is there code I could run to generate a report that might suggest sources of the delay?

a small code chunk that consistently reproduces the problem would be useful, along with any details of our environment; version of RSTudio, R, and details of the database connection if you feel that's related to the slowdown.

I typically encounter the freeze while connected to my company's AWS Athena database. I connect to Athena via dbConnect and RJDBC (athena_url is a connection string):

A typical code chunk like the following might freeze RStudio for 5 minutes, although it's usually the 3rd or 4th sql chunk that sets off the freeze. Mind you these are very small data being returned and the chunk is not executing during the freeze. It's after execution that RStudio becomes unresponsive.

A colleague of mine has noticed that this freeze only occurs when RStudio is connected to our Athena database and that removing this athena connections via rm(athena) will prevent future freezes, but obviously inhibit a workflow where connection to an Athena database is central .

Not sure if this is the same as this issue:
https://github.com/rstudio/rstudio/issues/5805'

Does this only happen when running chunks? Have you tried running the same db code in your console?

Yes I can run db code in my console, but my freeze is a different issue than what you linked to. The period of non-responsiveness does not happen while the sql executes. It can happen anytime while RStudio is connected to Athena. During this period I can type code in the console and in the Rmd document, but I cannot execute any of the code nor save my file. I have taken to typing beepr::beep() in my console and waiting for the beep to indicate that RStudio is responsive again. This non-responsive period typically lasts 5 - 30 minutes.

I am going to try to connect RStudio to Athena via ODBC rather than JDBC to see if this prevents the periods of non-responsiveness in RStudio.

@MikeBess I worked with some AWS engineers on this problem and they suspected that RStudio is intermittently pulling all the metadata from Athena (i.e., the name of every table in Athena), and this is bogging down RStudio and causing it to become unresponsive. Is there a way to deactivate this pulling of metadata by RStudio? Or do you suspect that pulling this metadata is driven by the driver? I am using the AthenaJDBC42.jar Driver.

I was already using the AthenaJDBC42.jar driver but have updated with the latest download of AthenaJDBC42.jar available here. We also removed the default catalog from the connection string for Athena and set UseResultsetStreaming=1 in that string. These changes seem to have prevented further sessions of unresponsiveness, but I will return if anything changes.

I worked with some AWS engineers on this problem and they suspected that RStudio is intermittently pulling all the metadata from Athena (i.e., the name of every table in Athena), and this is bogging down RStudio and causing it to become unresponsive.

This sounds plausible. Beyond explicit user gestures in the Connections pane, most of the UI updates are driven by R itself (e.g. by the driver or by the driver interface package).

There's a couple things we can do to get more information.

The next time the hang occurs, try looking at Help -> Diagnostics -> Request Log. You'll be presented with a graph of some of the different operations RStudio has been doing. If you see a "long" bar (other than 'get_events'), that may be associated with the slowness you're seeing.

You could also try generating an R profile. Within R, execute:

to start the profiler. Then, work with the IDE until the next bit of slowness occurs. When that happens, you can stop the profiler with:

and that may point us towards the function(s) being invoked that are taking a long time to complete.

@kevinushey Today when I experienced a lag

It may be worth checking if disabling automatic completions makes a difference here: 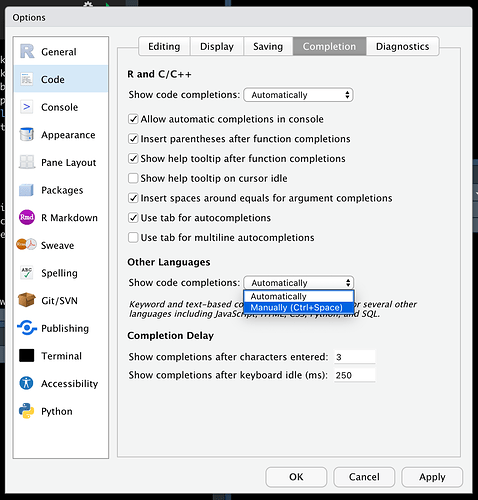 @kevinushey I have disabled autocompletions as you advised, but I am still experiencing frequent lags. I reran the summary after another lag. Do you have any other suggestions? For instance is there a way to disable R from fetching metadata from Athena?