Hello! I'm using a script in RStudio to scrape Goodreads reviews.
If the reviews are long, they are only partially visible, you have to click on "...more" to see the rest of the review:

The script deals with this and "clicks" on the "...more" (if it occurs), so the entire review is scraped:

The problem is that part of the review is now scraped twice: first the preview and then the entire review. So what I get is a CSV file containing this kind of reviews (short example I wrote myself):

I guess there is a clash between html_nodes and span:last-child?

Would someone with more experience in writing R-code and/or web-scraping please help me adapt this part of the script's code? Thank you in advance!

this read_html function, what package is it from ?
it appears to be giving you a character response instead of some kind of xml response that you might further parse with selectors etc.

Hello @nirgrahamuk, thank you for replying to my post! It's from the rvest package (https://cran.r-project.org/web/packages/rvest/rvest.pdf). I'm unsure why it causes a problem in the second line of code, because it doesn't give me an error when I use reviews.list <- lapply(reviews.html, function(x){read_html(x) %>% html_text()} ). What do you think?

this doesn't produce meaningful output, but neither does it error:

so either there is an issue with your read_html perhaps a namespace conflict.
try

or there is a perculiarity with your data reviews.html which I'd need to get hold of a sample of in order to understand.

@nirgrahamuk Here is the full script, if this helps? You should only need to set your working directory.

sorry, but what you've shared is not a minimal reproducible example, ... there is a lot of code there.

I personally don't want rJava on my machine, so I wont be using Rselenium.

However, if you can run your code to the point where there is data saved into reviews.html for one of your pages. you can share that data with the dput() function. and we can discuss the code that would immediately be processing that shared object that we would both have.

I'm sorry, I have no idea how to create a minimal reproducible example - I'm rather new at this and don't have a lot of experience with scripts. I think you might be able to run it without rJava, I was able to until my computer started acting strange after an update, that's when I had to install it, before I was fine without it.
Where should i put dput(reviews.html)?
Thank you for helping!

you would do this in your console. but it assumes there is a review.html object that you made already.
to read about reprex see

@nirgrahamuk Hello again, I ran it in my console and got the following output:

I did need to shorten it, because it exeeded the character limit. Does this help?

ok thanks for that.
The first thing I noticed is that the 8th review is twice as big as the first 7 views combined.
In fact the line

failed to run and gave an error

did you notice this behaviour ?

it can be fixed by

@nirgrahamuk
Thank you for pointing it out! I must admit I never noticed that behaviour. I usually just run the script in one go in RStudio and then I simply get this output in the console:

and then the csv-file is in the folder.

I've run the script again with the changed line and have compared the two resulting csv-files, but there doesn't appear to be a difference.

alright ! moving on...
so the issue was flagged was that adding a span:last-child step caused an error.
I tried this

I didnt get any error there with the reviews.html that was shared to me. with that same reviews.html do you get the error you had originally ?

@nirgrahamuk Thank you for helping me!
I replaced the line of code with the one you suggested and I got the following error message:

The csv-file that was created was empty, so I don't think it succeeded in scraping reviews anymore.

I feel like youve jumped ahead, you didnt answer the question I asked....

I had to shorten it again, but if it is too short I could perhaps send you the entire output in private message if that might help?

with the reviews.html that you gave me, and the lapply() functional call that we discussed, do you get your original error or not ?
why do you want to change reviews.html now? please give a reason.

I'm sorry if I misunderstood!

No, I get the following error after I changed the lapply line:

I'll add a screenshot, maybe that explains it better? 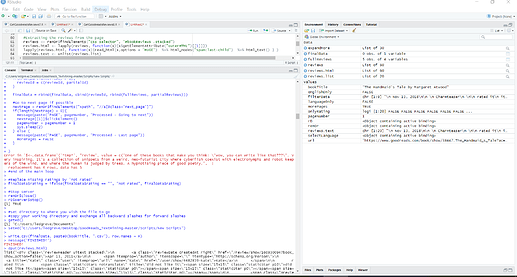 afbeelding1920×1031 129 KB
I don't really want to change reviews.html, but because it's such a popular book the reviews keep changing and they were different when I ran the script again, so that's why the output I sent you in my last message was different than the previous one. Is this what you meant? (I'm sorry if I got it wrong, English is not my native language, so sometimes I misunderstand)
nirgrahamuk June 18, 2020, 3:48pm #18

you get an error many many lines beyond the error we were originally focussed on.
Are we to conclude that we somehow fixed that original error ?

Error in UseMethod("xml_find_all") : no applicable method for 'xml_find_all' applied to an object of class "character"

or perhaps the particulars of the reviews.html that you shared with me simply did not produce examples of that error, so it was a less than ideal example to have shared ?

@nirgrahamuk Hello again, I'm sorry I couldn't reply anymore last night. I'm not sure the original error has been fixed (it appeared at the same place as this one), I think the new error may just be kind of "covering" it, if that makes sense?
That might be the case, because I had to shorten it so much. I will send you a longer sample via private message, if that is alright with you?

ok, if you have to transfer slightly larger objects.
best save them out to binary RDS objects by using saveRDS.
You could then use a hosting service such as onedrive, dropbox, googledrive, github etc etc. to share your file through a link.
You can write such a link in a forum post.