Running an ANCOVA to see if there is a difference in the adjusted means (least square means LSM) of my dependent variable between two areas (Area1 and Area2) while controlling a variable as a covariate. I tried two ways, with aov() and lm(). I would like to ensure I am interpreting the results correctly. All assumptions have been met for an ANCOVA and there is no difference in slopes (used lm(dependent~Area*covariate)).

With the lm(dependent~Area+covariate). I see that there is no difference between the areas (p=0.274) using both the summary() and Anova() function and that Area2 is 0.09 less than Area1 (Can see this rounded up in lsmean as well). My Mean square error is 0.175. I can see my covariate and dependent variable also have a significant relationship (p = <0.2e-16) which is an assumption of the ANCOVA anyways.

So I am assuming my lm model is correct; however, I don't understand why the summary() gave me a wildly different result. I initially tried it to get my MSE before finding out that I can use model$residuals^2 to get it from the lm().

Thanks for any input! 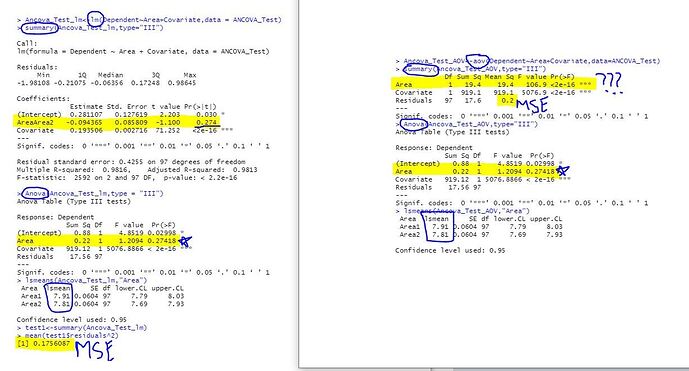