A few years ago I developed a package benchmark your computer. The general idea is to run a set of tests on different machines and compare the speed. For example, 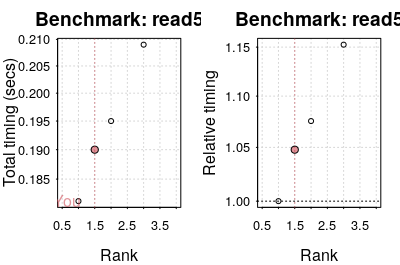 Unfortunately, due to changes/improvements in R (in particular the changes to the byte compiler), I've had to start collecting data again.

So if you have a few minutes to spare, would you mind benchmarking your system? Once I have a few more benchmarks, I'll update the CRAN package.

The package is on github. To run the benchmarks, install the package

Then to run the computational benchmarks

You can also compare read/write speeds

You can also compare your parallel speed: