The {verbatim} syntax seems to work properly in R, but I think it breaks RStudio's code chunk coloring and folding. 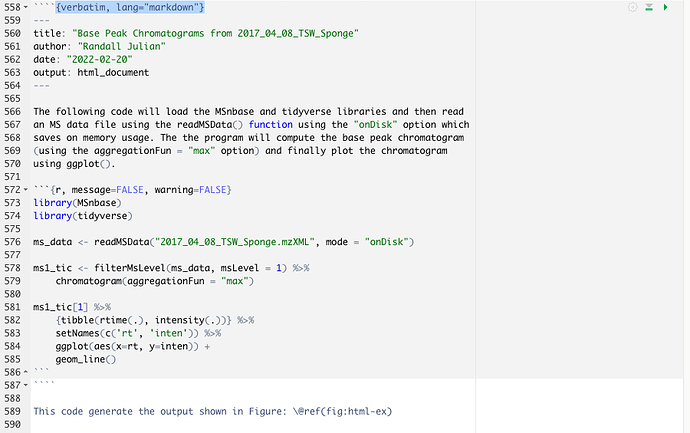 Notice how line 587 is not part of the gray block and colors the next text line incorrectly. The Rmd file renders just fine with no errors into a PDF using bookdown. It just seems like RStudio is not displaying it correctly.

Is there something I'm doing wrong here? Is there a better way to do this?

Yes this is a known issue with the IDE

### System details RStudio Edition : Desktop [Open Source] RStudio V…ersion : 2022.1.0.199 OS Version : Windows 10 x64 (build 19043) R Version : R version 4.1.1 (2021-08-10) ### Steps to reproduce the problem Open a new rmarkdown document and paste the following content `````markdown --- title: "Test" output: html_document --- # A Header ````{verbatim} We can output arbitrary content verbatim. ```{r} 1 + 1 ``` The content can contain inline code like `r pi * 5^2`, too. ```` # Another header Some content ````` ### Describe the problem in detail The source editor will not correctly recognized the nested chunk and it will mess up the highlighting ![image](https://user-images.githubusercontent.com/6791940/141510901-b1ece567-cf2c-4dd1-b92e-86d97083e242.png) Example with the code chunk not being correctly highlighted, and headers not correctly found after the chunk. ### Describe the behavior you expected This syntax is something rather new in **knitr**. Last version support nested chunks and some engine will benefit from this like the `comment` engine or the `verbatim` engine. WIth the current IDE behavior, it is rather hard to write and read such content. I would expect the highlighting of the Markdown document in the IDE to be the same as without nested chunk. cc @yihui

You can put a

there to show that this is indeed annoying...

In this case, you can put the content of the chunk in another R Markdown file, and then use the embed engine to include it as verbatim content. The markdown source won't be messed up.

Thanks for the quick answer and the alternative approach. I put the

on github - since it is, indeed annoying.