At my company we have a shinyapps.io account and have published multiple apps on our account. This afternoon, randomly two of our apps just stopped working. When accessing the app the page just hangs, the loading screen never resolves. I tried refreshing a bunch but it didn't solve the problem. I checked, and the other shiny apps published on our company's account are still working (making me believe it isn't an account issue).

I tried to republish the app but now the deployment is stalled with "Waiting for task: 1043237163". Not sure how to fix this since it happened randomly and I don't know how to diagnosis what is going on. Any thoughts? 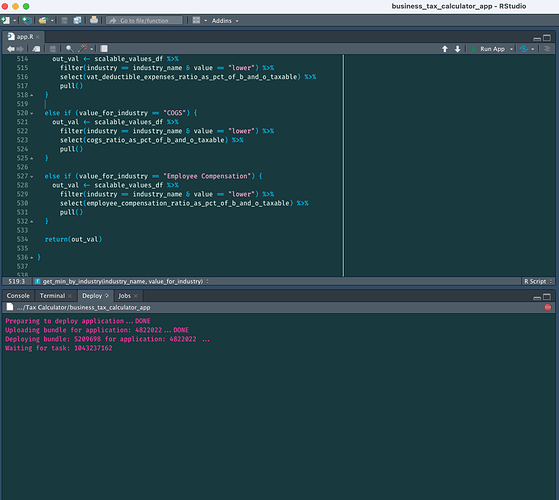 Here is the link to one of the apps in question https://econw.shinyapps.io/business_tax_calculator_app/

I've been having shinyapps.io performance issues for the last several days as well. My students are reporting that the app (a learnr tutorial deployed on my Shiny account) either fails to load, or works initially but then starts hanging at some point. This is the case even when they don't execute any code in the app, other than to answer multiple choice questions.

Like you, I also had subsequent deployment issues (from RStudio Cloud to shinyapps.io) - the issues were with deploying a different app though, not with redeploying the same problematic app. Not sure if it's related. I got the 409 error but apparently that may be because I was replacing an older version of the app with the same name.

Hard for me to say if the performance issues lie just with the one particular app, or with my other apps too, since my students only work on one app each week.