I like to estimate the model below with dlm package.

The unknown parameters are a , b and variances of ε, e. These have to be estimated by Maximum likelihood method.
The second equation can be rewritten as the third equation.
I am not sure how I should apply dlm package for these equations as dlmModReg function seems not to be appropriate.

If someone can help me out, that would be very appreciated.

Hi @yaji and welcome to the RStudio Community

I think I may be able to help; however, I have three questions for you:

Thank you very much for replying.

@yaji You could upload it to any cloud platform of your choice and then share a link here (e.g. Google Drive, Onedrive, ...)

Thanks for your instruction.

@yaji It seems like the file is corrupted. I am not able to open it

I suggest you convert your file into a csv file. Also, just send me a download link so that I can directly download it rather than access the file online.

@gueyenono Sorry for that. Does this link work for you?

Yes it does! @yaji I'll look into the question for you and get back to you.

Thanks. I really appreciate your help!

I wasn't really getting why you called b the long-term mean of \beta_t, the optimal hedge ratio. I figured it out. \beta_t is an AR(1) process and assuming that it is stationary (i.e. 0 < a <1), its long-term mean is computed as:

where ab is the constant and (1-a) is the coefficient of the AR(1) process. So this is MY take on how to tackle your problem. Let me first start with the theoretical side of things. Here is the general matrix representation of dynamic linear models:

where \varepsilon_t and u_t are normally distributed mean zero processes of constant variance. The system under consideration here is a dynamic linear model with a dynamic level (\alpha_t) and a dynamic slope (\beta_t):

where \epsilon_t, v_t and w_t are normally distributed mean zero processes of constant variance. This system cannot be directly put into the DLM matrix form without a bit of transformation. This is because of the constant term ab in the equation for \beta_t. But it is possible to get rid of it by demeaning \beta_t.

Note that the constant ab is no longer present. Given our new system, we have:

In traditional models such as this one, matrix G is slightly different:

So we will have to manually modify the G matrix in the code.

Now that the system has been identified, it is time to do some coding. You mentioned earlier that the data you uploaded was in first differences (y_t - y_{t-1}). I'm having a hard time to accept that because the average values for each of the two price series are: \$217.39 for ASX and \$166.45 for HRW. Whether the currency is US dollars or Australian dollars, it is hard to believe that these prices change by over $100 daily! So I am going to assume that your data is the actual prices, not the first differences.

First, the HRW column has some NA values, which are problematic for the regression model we want to fit. So I am going to impute them with the mice package.

The estimated level and slope coefficients can be obtained with:

The first column is for the level and the second column is for the slope. This model does a pretty good job fitting the data. In the following visualization, I plot the actual series against the estimated levels (in red): 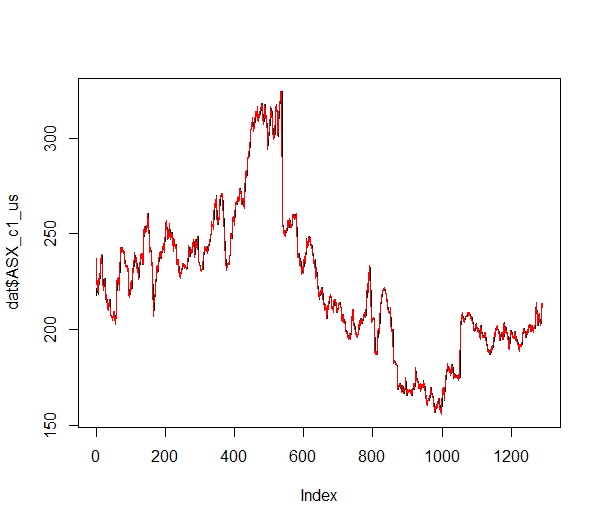 @gueyenono
Thank you very much. You fully understand my strugle which is the constant ab in the equation of β. Your interpretation of long term mean and the price series is also correct. Sorry for my lack of explanation.

Could I please ask some questions to your answer?

Then the mean is:

If you demean the series, then the constant disappears:

So the constant ab is not absorbed. If I were to fully write the new system explicitly, it would be:

I completely understand 1. and 3. thanks to you.
You have already been a great help but if you could provide me with something in relatino to 2., that would be appreciated.

The only thing I can think of now regarding point number 2 is that you can keep the same estimation process in R with a slightly different narrative regarding the model for \beta_t. We can just assume that the data generating process for \beta_t has no ab constant term by adding it to the error term:

where z_t = ab + w_t. Again, the estimation in R remains the same, but the narrative is different. This way the estimated slope is indeed \beta_t and not the demeaned version. Also, here is how it converges to this value in the long-run: 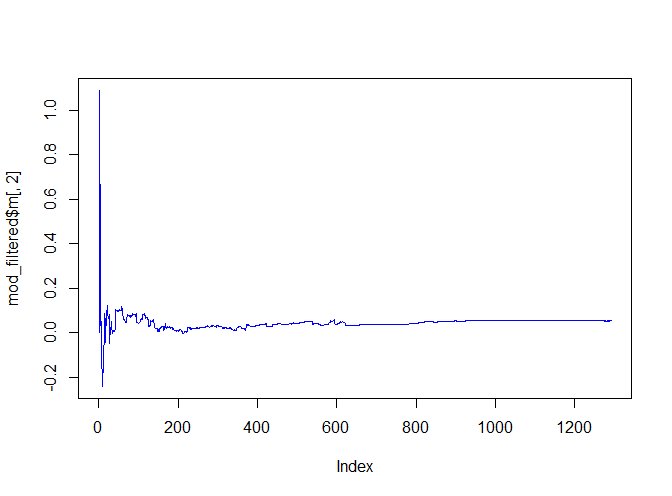 By the way, I did not mention it earlier (you may already know it), but the optimal hedge ratio according to this model is:

Hi @gueyenono, thank you for your reply again and again.

I think the system you gave me last time is the best. We cannot identify optimal hedge ratio itself (=β) but we get to know how β moves in time from β - b.

As you may be aware, your last model is hard to interprete as the equation can be rewritten:

This equation does not look like mean reversion model.

Anyway, thank you so much for your great help!

I am not sure why you think that the last model is hard to interpret. Also, it definitely exhibits a mean-reverting process so long as 0 < a < 1. This quick simulation here can show it to you:

Finally, I am glad I was able to help you. Consider marking my answer as the solution to the question for people who may look for help in the future.