Economy tracker: the impact of COVID19 in Europe

Abstract: This Shiny application examines the evolution of key economic data for European countries, retrieved from the Eurostat API. It aims at visualising the economic impact of the COVID19 pandemic on unemployment, inflation and GDP.

2. Inflation rates based on the Harmonised Index of Consumer prices, as well as the related expenditure weights.

Changes to these three main data series since the start of 2020 are monitored and contextualised with reference to past events (in particular in relation to the last major economic downturn, which began across Europe in 2008). While it remains too early to draw definitive conclusions about the overall impact of the COVID19 pandemic, some emerging trends are highlighted by the application:

• Unemployment has increased following the pandemic, but levels generally remain below the peak recorded during the last recession.

• Household expenditure patterns have changed as lockdowns and restrictions on movement have meant the relative importance of spending on transport, restaurants, hotels and other recreation and cultural activities has declined.

• The drop in economic output that started in the first quarter of 2020 was more abrupt than the decline that began in 2008, but the bounce back has been quicker. Nonetheless, for now, output remains below the levels reported in 2019. 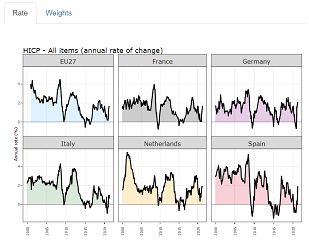 I am new here, and still in the process of learning Shiny, so would welcome feedback and (constructive) criticism on what have I done...any suggestions on additional data or charts to add also welcomed.