Is there anyone in here used energy data ( i.e electricity cons ) and did some modelling? My variables are as follows;

Would it be sensible or valid to model like ; Total Elec cons~ IT+ CDD, please note that IT cons is a subset of Total Elec.
If anyone can shed light on this please? Many thanks . 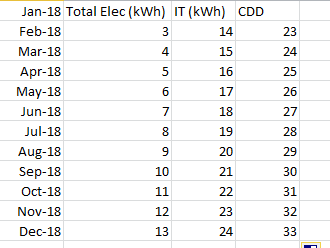 A reproducible example, called a reprex would be preferable to play with. Sample screenshots are not generally helpful, and this one is a bit misleading as well, because IT > Total

It helps to think of this casually. (I know, gasp.) The energy budget within a building envelope consists of net solar gain ± net heating + net cooling + net circulation + net lighting + net other device consumption. (Neglecting the rare case of on site solar or wind generation.)

IT centers are heat sources and cooling sinks--they consume more energy than they do work and the excess heat must be removed. They generally don't have views, so there is no chance of added heat load through insolation. Surrounding spaces are also generally cooler for human habitation.

In addition, IT net energy consumption is probably more driven by cooling load than by CPU + I/O and cooling load may not be all that directly sensitive to CDD, again because IT doesn't gain heat from its surroundings and benefits by conductive heat transfer when surroundings are cooler.

All of which is to say that Total = IT + Other, which is simply a difference between Total and IT.

fairly uninteresting except in the case, possibly, that IT consumption includes its cooling load.
As a result, IT consumption should not be collinear with CDD.