Dear Folks--
When working on a project that uses the tidyverse family functions for its core data manipulation, I often find that I know a base R function that does roughly what I want, but I don’t know if there is a corresponding tidyverse function, or if there is, what that function would be. Now, obviously there are a lot of tidyverse functions that do not tightly correspond to base R functions, and vise versa, but there are also a lot that do.

Knowing that I am by no means alone in frequently having questions of this sort – you see them on stackoverflow all the time – I wonder if anyone knows of an attempt to create a base R to tidyverse dictionary, or whatever the proper word is for such a list of correspondences.

In the same vein, is there a straightforward way of searching tidyverse vignettes and function documentation that does not search all such documentation? This gets tricky if we want to include packages that are intended to extend the tidverse or to be, so to speak, “tidyverse compliant.” I did a quick search of “tidy” on the one-line package descriptions on the CRAN package list, and it is my belief that all of these packages are intended to work well with other packages in the tidyverse family, though I am sure most of them have not been vetted or approved by the “tidy Core Team,” to the extent that such a thing exists. (Note: Including the package names along with the descriptions when doing this search just adds noise to the result).

Here are the dplyr ones: 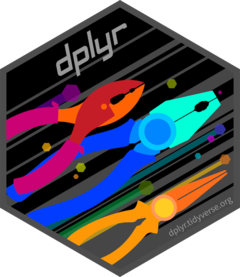 How does dplyr compare to base R? This vignette describes the main differences in philosophy, and shows the base R code most closely equivalent to each dplyr verb.