I've been using Git with RStudio for quite some time, but today I noticed that the Git tab disappeared. I didn't use Git for a few days so that it may disappear earlier.
The problem looks similar to this thread: Git Tab no longer appearing, but I'm on Windows

I've chosen the Git option for the version control system in the Project Options, agreed to initialize a new git repo, and restart the session. However, RStudio doesn't see the Origin: 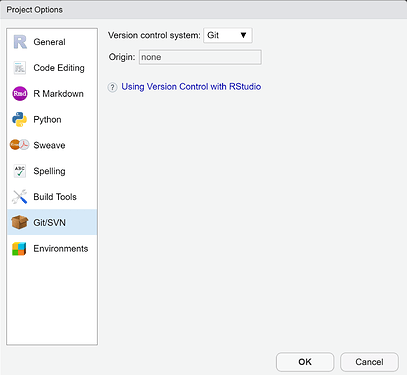 while usethis::use_github() definitely sees where the origin is:

I've been recentrly updating all Windows, RStudio, and Git to the latest versions.

What can I do with that problem?

I managed to get the Git pane back. Unfortunately, I did not notice the exact moment when it re-appears.

Two points one of which, most likely, solved the problem: