Is there a function/way to apply time series considering on 6 columns in the data ?
P.S: Used one-hot encoding to transform the categorical variable

Reprex
We can simple apply auto.arima on AirPassengers dataset available from R packages but what if there are more than 1 variable influencing the output variable.

Let's consider we have airquality dataset in R:
We want to predict Wind
But it has Solar.R, Ozone, Temp which are influencing this output variable: Wind
How can can I use all these variables along with time: Month and Day
in order to predict Wind.
Although, found someone applied this, I could not grasp how they applied in Kaggle.
https://www.kaggle.com/raenish/time-series-on-air-quality/code

Thanks in advance,
Abi

Could you please turn this into a self-contained REPRoducible EXample (reprex)? A reprex makes it much easier for others to understand your issue and figure out how to help.

If you've never heard of a reprex before, you might want to start by reading this FAQ:

Thanks Andrescs, I updated the question with more reprex and description sharing researched links as well.

From auto.arima() documentation you can pass multiple exogenous variables in the form of a matrix, with the xreg parameter.

xreg Optionally, a numerical vector or matrix of external regressors, which must have the same number of rows as y . (It should not be a data frame.)

Here is a toy example 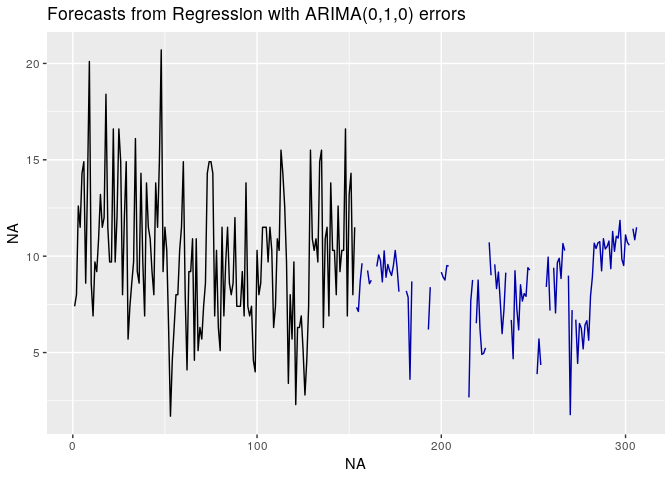 Thanks Andres for helping me.
Actually, I am facing the issue:
xreg is rank deficient but I should not get rid of columns with zeros because it was obtained after one-hot encoding.

So, I was wondering how to resolve this.
Due to onehot encoding, most columns are zeroes. and hence xreg is rank deficient.
What else I can do ?
There are categorical values influencing the outcome apart from onehot encoding.

This is a different issue than the one in your original question. Please open a new topic with a reprex and sample data relevant for this specific problem.