I have never used RStudio before, and have zero code knowledge. I am using this for a political research methods class, and am completely lost on a final project. I need to download "poliscidata" and I have, however it keeps saying:

I have no idea what this means, I have the polscidata in my folders it looks like this.: 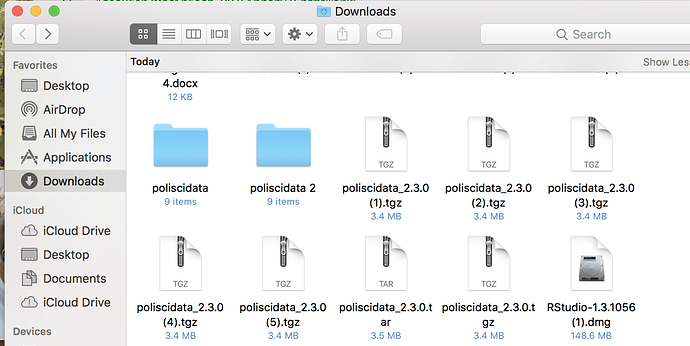 I would really appreciate any help, I am so lost, and my professor also does not know what to do!

Thank you soo so much
Isha

You do not need the binaries. Those are for the hard-core addicts.

You should be able to install the package with the command:
install.packages("poliscidata")

To use it, issue the command:

If you are completely new to R a glance at https://www.statmethods.net/r-tutorial/index.html may help and save you a lot of time.

I feel the need to clarify this statement:

You do not need the binaries. Those are for the hard-core addicts.

This is not really true, in fact the exact opposite is likely more true. The binaries are pre-compiled versions of R packages. These binaries make it much easier to install packages for novice users. Without these, users would have to compile the source code to install/build the packages. If @ishanigam, has limited coding background what I just wrote might seem like non-sense, the bottom line is that the CRAN team has done some extra work behind the scenes to make these packages easier to install, and the binaries are the result of this work.

Lastly, the message below just tells you where R downloaded the package on your computer before installing it. This is a temporary folder that R uses when installing packages. It gets deleted when the R session is closed. Nothing to worry about.

@mattwarkentin hi thank you so much, but when I ran library("poliscidata") it said this:

@mattwarkentin even if I type the poliscidata without the quotation marks, it still says the whole error message

The poliscidata package has been correctly installed but you have a problem with the png package, can you try reinstalling this package? Do you get any error messages?

Also, can you check if you have an updated version of xquartz installed in your system?

@andresrcs I updated the "png" and it says this:

I also updated xquartz and restarted my computer before trying the png thing! Please let me know if you need some more information in order to help!

Appreciate it so so much!

yes i still get the same error message!